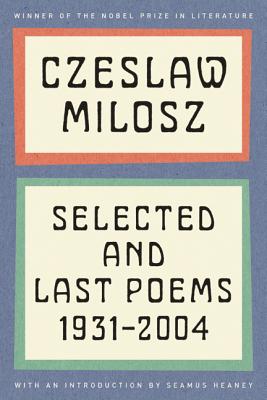 “One of the century’s most important poets.”
—San Francisco Chronicle

“Nobody tells the story of this age better than Czeslaw Milosz.”
—New Republic

Commemorating the centenary year of Nobel Laureate Czeslaw Milosz, Selected and Last Poems 1934 - 2004 is a sterling collection of some of the finest works of one the most revered poets of our time—including more than forty later poems new to this edition and never before published in English. Selected and Last Poems is a perfect introduction for poetry readers who might still be unfamiliar with this literary giant’s monumental body of work.

Czeslaw Milosz was born in Szetejnie, Lithuania, in 1911. He worked with the Polish resistance movement in Warsaw during World War II and was later stationed in Paris and Washington, D.C., as a Polish cultural attaché. He defected to France in 1951, and in 1960 he accepted a position at the University of California, Berkeley. He was awarded the Nobel Prize in Literature in 1980, and was a member of the American Academy and Institute of Arts and Letters. He died in 2004.