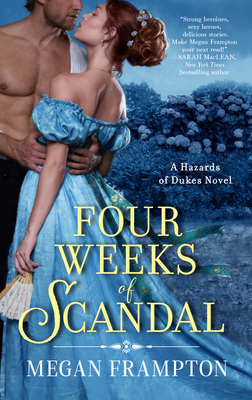 If you love the sparkle of Tessa Dare and the wit of Sarah MacLean, then you won’t want to miss this newest historical romance by Megan Frampton, who returns with a delicious story about a will in dispute, a four-week bargain, and a pretend engagement with romantic consequences.

It only takes one moment to cause a scandal...and four weeks to live it down!

Week one: Lovely, lively Octavia Holton arrives in the village, determined to claim her inheritance—the home she grew up in with her late father. Surely he meant for his daughter to have the property, and owning it means she could fix it up, sell it, and use the money to pay off her debts. But when she arrives, she discovers the house is also claimed—by one Gabriel Fallon.

Week two: Gabriel claims his father won the property in a bet, but he can’t bring himself to toss Octavia out on her very delightful derrière, so he makes her a four-week bargain: Together they’ll pretend to be engaged, all the while seeking out any will, letter, or document that proves who gets the ownership.

Weeks three and four: But that means togetherness...a lot of togetherness, and long days—and evenings—in each other’s company. The pair seems destined to “duke it out,” staking their claims...but it’s all too soon that they realize their rivalry might lead to something much more intimate. And suddenly four weeks seems like a long time. And yet not enough.

Megan Frampton writes historical romance under her own name and romantic women’s fiction as Megan Caldwell. She likes the color black, gin, dark-haired British men, and huge earrings, not in that order. She lives in Brooklyn, New York, with her husband and kid.

“[A] charming combination of steamy, funny, and warmhearted…Frampton combines the best elements of classic Regency with contemporary touches.” — Kirkus Reviews on A Wicked Bargain for the Duke

“Sparkling…[Never Kiss a Duke] bursts with delightful banter, restorative supporting characters who dance off the page, and plenty of steamy interludes and tantalizing yearning.” — Entertainment Weekly

“Megan Frampton’s Never Kiss a Duke is a delightful mixture of warmth, wit, humor, and sensuality that had me reading late into the night.”  — Lorraine Heath, New York Times bestselling author

"Frampton (Never a Bride, 2019) could give Scheherazade a run for the money when it comes to crafting a compelling tale, and the superbly written first entry in her historical romance Hazards of Dukes series is another brilliant confection composed of equal measures dazzlingly droll wit and deliciously sexy romance." — Booklist

"A captivating second in the Hazards of Dukes series (after Never Kiss a Duke). Frampton deftly handles heavy subjects of abuse and neglect without ever losing the light of her characters’ spirits or tamping down the steamy, slow-burn romance... Will enthrall readers of Eva Leigh’s Union of the Rakes series." — Library Journal