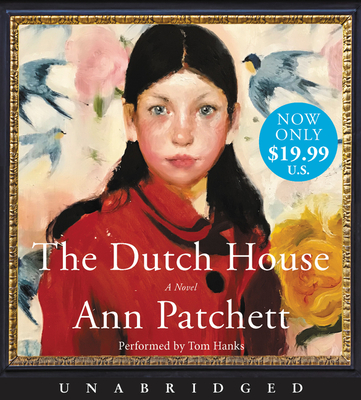 From the New York Times bestselling author of Commonwealth and State of Wonder, comes Ann Patchett’s most powerful novel to date: a richly moving story that explores the indelible bond between two siblings, the house of their childhood, and a past that will not let them go. The Dutch House is the story of a paradise lost, a tour de force that digs deeply into questions of inheritance, love and forgiveness, of how we want to see ourselves and of who we really are.

At the end of the Second World War, Cyril Conroy combines luck and a single canny investment to begin an enormous real estate empire, propelling his family from poverty to enormous wealth. His first order of business is to buy the Dutch House, a lavish estate in the suburbs outside of Philadelphia. Meant as a surprise for his wife, the house sets in motion the undoing of everyone he loves.

The story is told by Cyril’s son Danny, as he and his older sister, the brilliantly acerbic and self-assured Maeve, are exiled from the house where they grew up by their stepmother. The two wealthy siblings are thrown back into the poverty their parents had escaped from and find that all they have to count on is one another. It is this unshakeable bond between them that both saves their lives and thwarts their futures.

Set over the course of five decades, The Dutch House is a dark fairy tale about two smart people who cannot overcome their past. Despite every outward sign of success, Danny and Maeve are only truly comfortable when they’re together. Throughout their lives they return to the well-worn story of what they’ve lost with humor and rage. But when at last they’re forced to confront the people who left them behind, the relationship between an indulged brother and his ever-protective sister is finally tested.

Ann Patchett is the author of eight novels, four works of nonfiction, and two children's books. She has been the recipient of numerous awards, including the PEN/Faulkner, the Women's Prize in the U.K., and the Book Sense Book of the Year. Her most recent novel, The Dutch House, was a finalist for the Pulitzer Prize. Her work has been translated into more than thirty languages. TIME magazine named her one of the 100 Most Influential People in the World. She lives in Nashville, Tennessee, where she is the owner of Parnassus Books.

Tom Hanks is an award-winning actor, producer and director. One of only two actors in history to win back-to-back Best Actor Academy Awards, Hanks has starred in over 40 films, including Forrest Gump, Saving Private Ryan, Cast Away, Big and Philadelphia. With his production company, Playtone, Hanks has produced several award-winning TV series including John Adams, Band of Brothers and Olive Kitteridge. In 2013, he garnered multiple award nominations for his Broadway debut in Nora Ephron’s Lucky Guy. Hanks has received the AFI’s Lifetime Achievement Award, the Kennedy Center Honor, and the Presidential Medal of Freedom.

“The Dutch House has the richness, allusiveness, and emotional heft of the best fiction.” — Boston Globe

“As always, the author draws us close to her portagonists swiftly and gracefully.” — Wall Street Journal

“Patchett’s splendid novel is a thoughtful, compassionate exploration of obsession and forgiveness, what people acquire, keep, lose or give away, and what they leave behind.” — Publishers Weekly (starred review)

"You won’t want to put down this engrossing, warmhearted book even after you’ve read the last page.” — NPR

“The Dutch House is unusual, thoughtful and oddly exciting, as well-told domestic dramas can be.” — Columbus Dispatch

“Patchett is a master storyteller.” — O, the Oprah Magazine

“Patchett is at her subtle yet shining finest in this gloriously incisive, often droll, quietly suspenseful drama of family, ambition, and home. . . . With echoes of F. Scott Fitzgerald and in sync with Alice McDermott, Patchett gracefully choreographs surprising revelations and reunions as her characters struggle with the need to be one’s true self.” — Booklist

"As always, Patchett leads us to a truth that feels like life rather than literature." — The Guardian

"For Patchett fans who have been waiting for years, it's a worthwhile read." — Evening Standard (London)

"This finely textured novel is made up of many such small, intimate moments, yet the effect is sweeping, grand, and lavish—and all deeply moving." — New York Journal of Books

"This is a serious and poignant story, but also a delightfully funny one." — Washington Independent Review of Books

"The Dutch House is beautifully written and often tender." — The Spectator

"A great novelist is on top form with this tale of lost family home." — The Times (London)