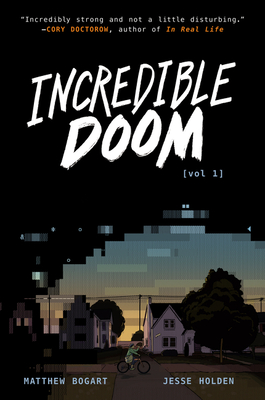 This is book number 1 in the Incredible Doom series.

“Incredibly strong and not a little disturbing.” —Cory Doctorow, author of In Real Life

Welcome to a new age…the age of the internet.

Allison is drowning under the weight of her manipulative stage magician father. When he brings home the family’s first computer, she escapes into a thrilling new world where she meetings Samir, a like-minded new online friend who has just agreed to run away from home with her.

After moving to a new town and leaving all of his friends behind, Richard receives a mysterious note in his locker with instructions on how to connect to “Evol BBS,” a dial-in bulletin board system, and meets a fierce punk named Tina who comes into his life and shakes his entire worldview loose.

“Perfectly captures the mystery and wonder of the early days of the internet.”  —Andy Baio, author of Waxy.org and co-founder of XOXO

"A rush of love for brave beginnings—of both the early internet and the teens who used it to find themselves and each other." —Eleanor Davis, author of The Hard Tomorrow and How to Be Happy

"A compelling story complimented by pleasingly minimal art that skillfully evokes a sense of loneliness and isolation. " —Savanna Ganucheau, co-creator of Bloom

"A sharp and authentic wild ride that brought me back to my teenage years as a punk with a dial-up connection.” —Kevin Panetta, co-creator of Bloom

“A poignant and often hilarious reminder that technology is at its best when it’s easing the ache of loneliness and bringing people together."  —Jeff Zentner, Morris Award-winning author of The Serpent King

Matthew Bogart is a cartoonist living in Portland, Oregon. He has been publishing comics since he was ten and his father let him loose on the office photocopier.

Matthew Bogart is a cartoonist living in Portland, Oregon. He has been publishing comics since he was ten and his father let him loose on the office photocopier.

Jesse Holden is a writer, designer, and creative collaborator on comics, novels, podcasts, and video games. He lives in Portland with his dog, Fergus.

The human stories of desperation, of reaching out, and of discovering new worlds really shine here, both in characterizations and in sharp linework and careful compositions that elegantly highlight meaningful moments. — Booklist (starred review)

Readers will root for these characters who are desperately attempting to forge much-needed bonds in this retro-tech drama that gets so much of the Nineties right that it hurts. — School Library Journal (starred review)

Rendered in black, white and blue panels but rife with rose-tinted nostalgia, this quirky graphic novel, a collection of Bogart’s serial comics, offers a window into the days when nascent computer networks were a haven from harsh realities. — Bulletin of the Center for Children’s Books