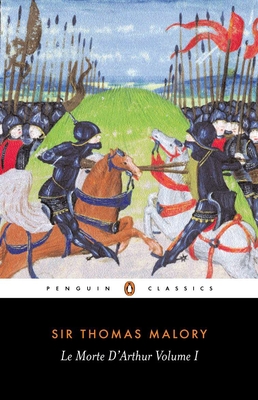 By Thomas Malory, Janet Cowen (Editor), John Lawlor (Introduction by)
$19.00
OUT OF PRINT: Email or call for price

Recounting Arthur's birth, his ascendancy to the throne after claiming Excalibur, his ill-fated marriage to Guenever, the treachery of Morgan le Fay and the exploits of the Knights of the Round Table, it magically weaves together adventure, battle, love and enchantment. Le Morte D'Arthur looks back to an idealized Medieval world and is full of wistful, elegiac regret for a vanished age of chivalry. Edited and published by William Caxton in 1485, Malory's prose romance drew on French and English verse sources to give an epic unity to the Arthur myth, and remains the most magnificent re-telling of the story in English.

No one knows for sure who the author of Le Morte D'Arthur was, but the generally accepted theory is that of American scholar G.L. Kitteredge, who argued it was Sir Thomas Malory, born in the first quarter of the fifteenth century, and who spent the greatest part of his last twenty years in prison. Another possibility is a Thomas Malory of Studley and Hutton in Yorkshire, or an author living north of Warwickshire. It is generally accepted that the author was a member of the gentry and a Lancastrain.

John Lawlor was Professor a of English Language and Literature at the University of Keele. He is the author of The Tragic Sense in Shakespeare, Piers Plowman: An Essay in Criticism and Chaucer.

Janet Cowen is a senior lecturer in English at King's College, University of London.