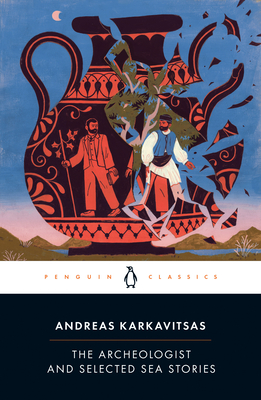 Translated into English for the first time, The Archeologist is a landmark of Greek national literature, and an important document in the history of archeology and classicism. Published for the bicentennial year of the outbreak of the Greek War of Independence.

The year 2021 marks the bicentennial of the outbreak of the Greek War of Independence. This historical milestone provides the impetus for a new period of intensified reflection on the past, present, and future of Greece, especially in light of recent financial and humanitarian challenges the country has found itself facing: the debt crisis that began in the last days of 2009 and the migration crisis five years later. These crises had already stirred renewed and often animated debate about Greek national identity, especially in relation to Europe, and the legacy of classical antiquity remains central to how that relationship is imagined. Where does Greece fit into the modern world and what role, if any, should its celebrated and idealized antiquity play in the country's national identity? More than a century ago, Karkavitsas's The Archeologist (1904) helped to articulate and frame these kinds of questions. The work is an allegory of Greek nationalism that is stylized as a folktale about Aristodemus and Dimitrakis Eumorphopoulos, two brothers and descendants of the illustrious Eumorphopoulos line. For centuries, the family had been persecuted by the Khan family, but when the Khan dynasty starts to topple, the Eumorphopoulos family resolves to regain their ancestral lands and restore their line's ancient glory. Yet the two brothers disagree about the best path forward into the future. Aristodemus insists, to the point of mania, that they must look only to the ancient past—to the family's ancient language, texts, religion, and monuments; Dimitrakis, on the other hand, exuberantly embraces the present. The Archeologist, however, attempts to map and dramatize the tensions that were violently brewing in the Balkans at the turn of the twentieth century and which, within a decade of the work's publication, would contribute to the outbreak of World War I. Also included in this edition are a selection of "sea tales," which Karkavitsas heard from sailors during his extensive time aboard ships in the Mediterranean. Considered as indigenous to Greek literature, the four sea stories represent some of the best known of the Tales from the Prow. "The Gorgon," one of Karkavitsas's shortest sea stories, is also one of the most famous.

Andreas Karkavitsas (1865-1922) is considered one of the most significant authors in the history of modern Greek literature. His life and career spanned formative and turbulent decades in the history of the young Greek state, which declared independence from the Ottoman Empire in 1821.

Johanna Hanink is associate professor of classics at Brown University. Her books include The Classical Debt: Greek Antiquity in an Era of Austerity (2017) and a translation of a collection of speeches from Thucydides's History of the Peloponnesian War (2019). She has published pieces in The New York Times, The Times Literary Supplement, Lapham's Quarterly, and History Today.