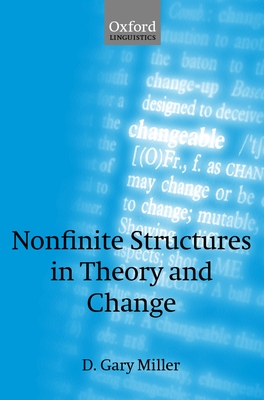 This book seeks to answer the questions: why do grammars change, and why is the rate of such change so variable? A principal focus is on changes in English between the Anglo-Saxon and early modern periods. The author frames his analysis in a comparative framework with extended discussions of language change in a wide range of other Indo-European languages. He deploys Chomsky's minimalist framework in a fruitful marriage of comparative and theoretical linguistics within an argument that will be accessible to practitioners in both fields.

D. Gary Miller is Professor of Classics and Linguistics at the University of Florida. He received his Ph.D. from Harvard in 1969, with a dissertation on Studies in Some Forms of the Genitive Singular in Indo-European. He has authored some forty articles on Indo-European, Classical, and General Linguistics. His books include Complex Verb Formation (1993) and Ancient Scripts and Phonological Knowledge (1994).