The Orphanage: A Novel (The Margellos World Republic of Letters) (Paperback) 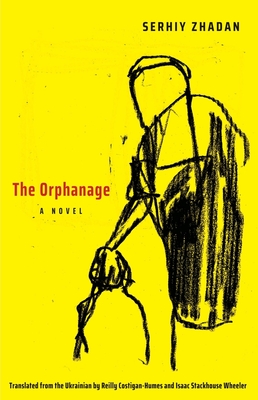 “Powerful . . . For those who want a glimpse of what life will be like in Ukraine for years to come, The Orphanage offers a frightening glimpse.”—Bill Marx, Arts Fuse

If every war needs its master chronicler, Ukraine has Serhiy Zhadan, one of Europe’s most promising novelists. Recalling the brutal landscape of The Road and the wartime storytelling of A Farewell to Arms, The Orphanage is a searing novel that excavates the human collateral damage wrought by the ongoing conflict in eastern Ukraine. When hostile soldiers invade a neighboring city, Pasha, a thirty-five-year-old Ukrainian language teacher, sets out for the orphanage where his nephew Sasha lives, now in occupied territory. Venturing into combat zones, traversing shifting borders, and forging uneasy alliances along the way, Pasha realizes where his true loyalties lie in an increasingly desperate fight to rescue Sasha and bring him home.

Written with a raw intensity, this is a deeply personal account of violence that will be remembered as the definitive novel of the war in Ukraine.

Serhiy Zhadan, recipient of the 2022 Hannah Arendt Prize for Political Thought and the 2022 German Peace Prize, is widely considered to be one of the most important young writers in Ukraine. He has received several international literature prizes and has twice won BBC Ukraine’s Book of the Year award. His previous books include Mesopotamia and What We Live For, What We Die For: Selected Poems. Reilly Costigan‑Humes translates literature from the Ukrainian and Russian. Isaac Stackhouse Wheeler is a translator and poet.

“A gray, marginal world in which life is punctuated by bursting shells and the ebb and flow of soldiers from either side. . . . Ambient dread gives the novel a dystopian flavor, but Zhadan is writing about real life . . . The Orphanage is a journey through the underworld, recalling Dante and the Greek classics.”—Sophie Pinkham, New York Review of Books

“Serhiy Zhadan has a wonderful sense of rhythm and musicality in his language . . . Zhadan is a master of metaphors and he creates very vivid portraits of ordinary people living in a battle zone. In this novel his literary talent shines like painful stars over the urban landscape painted by the silence and noise of the war.”—Sofi Oksanen, Literary Hub

“Powerful . . . A forceful vision . . . For those who want a glimpse of what life will be like in Ukraine for years to come, The Orphanage offers a frightening glimpse.”—Bill Marx, Arts Fuse

“Zhadan captures the grim war-torn city experience very well . . . In its basis in real-life conditions that are so close to us, in time and place, [The Orphanage] serves well as a solid, all-too-close-for-comfort picture of how quickly societal collapse can ripple through even safe-seeming harbors, a reminder of how near such situations might be, to all of us.”—M.A.Orthofer, Complete Review

“Compelling. . . . Zhadan refuses to speak the language of a propagandist: above all, he is interested in how the war has transformed the lives of everyday people—that is, the most innocent and vulnerable in Ukrainian society.”—Kate Tsurkan, Asymptote

“[Ukraine] has been embroiled in bloody conflict since 2014. . . . With The Orphanage, this war finds its bard in Serhiy Zhadan, one of Ukraine’s most interesting and talented writers.”—Michael Idov, Book Post

“Masterfully written, The Orphanage is a powerful testimony to the horrors of war in the everyday life of adults and children alike.”—Paula Erizanu, Calvert Journal

“[Zhadan] belongs to a long line of poets playing a crucial role in Ukrainian culture . . . In The Orphanage, the protagonist Pasha sets out on a quest to save his nephew from occupied territory in eastern Ukraine and is met with a cast of characters who are struggling to come to terms with this new binary landscape.”—Amanda Coakley, Time

Shortlisted for the EBRD Literature Prize 2022