Starring Steven Spielberg: The Making of a Young Filmmaker (Hardcover) 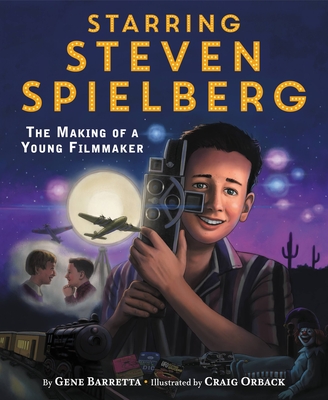 Steven Spielberg is the legendary director and producer behind many of the most popular films of all time—now, discover where did it all began with this exclusive look into his life.

Before Steven made films, he watched them. Naturally inventive with a vivid imagination, he was known for creating stories inspired by the world around him. His passion wasn’t driven just by entertainment, however—as the only Jewish boy in his neighborhood, he was often bullied and felt the sting of antisemitism.  He also suffered the pain of his parents’ divorce. Films and the magic they contained became a necessary escape. From his younger years to his first days on a movie set, this biography captures the unique ways Steven’s memories influenced his career and helped him to become the celebrated filmmaker that he is today.

Gene Barretta is the author and illustrator of Now & Ben: The Modern Inventions of Benjamin Franklin, Neo Leo: The Ageless Ideas of Leonardo da Vinci, and Timeless Thomas: How Thomas Edison Changed Our Lives, which was the recipient of a Cook Honor from Bank Street College of Education. He holds a B.F.A. in Film Studies from New York University, and has worked for many years in film and television production. He lives in Wynnewood, Pennsylvania with his son. https://www.genebarretta.com/

Craig Orback has illustrated many books for young readers, including Born to Draw Comics: The Story of Charles Schulz and the Creation of Peanuts, as well as Gifts from the Enemy and The Can Man. He lives in Seattle. http://www.craigorback.com/

* "The story adeptly links the boy’s fears and hardships to his most celebrated movies and focusing on the filmmaker’s own conviction that even the most fantastical of his stories is based on his own life.... Inspiring text and illustrations evoke the journey of an iconic filmmaker. Recommended for all collections."

"Scenes from a famous director’s childhood.... Panoramic, colorful, action-packed spreads give the book a cinematic feel.... Educational and entertaining."—Kirkus Reviews

"Budding film buffs gain insight into the work of Steven Spielberg….Opening with Spielberg’s early experience as a moviegoer in the 1950s, the book shines a particular spotlight on the way that experiences from his youth, ranging from anxiety to his parents’ divorce, shaped his sensibilities as a director."—Publishers Weekly

"Starring Steven Spielberg fills in young cineastes on important technical aspects of the art—from staging and editing to watching both popular movies and audience reactions with analytical eyes…. The dramatic lighting and vivid colors in Orback’s illustrations of the young Spielberg in various settings, usually with a camera, and some of his iconic characters are properly cinematic."—Booklist