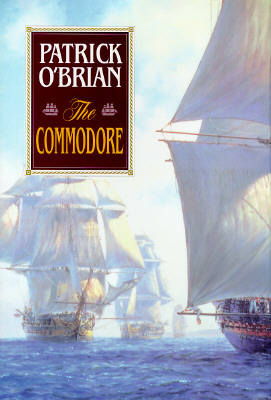 By Patrick O'Brian
$24.00
It's Complicated - Contact Us for More Information

This is book number 17 in the Aubrey/Maturin Novels series.

The seventeenth novel in the best-selling Aubrey/Maturin series of naval tales, which the New York Times Book Review has described as "the best historical novels ever written."

Having survived a long and desperate adventure in the Great South Sea, Captain Jack Aubrey and Stephen Maturin return to England to very different circumstances. For Jack it is a happy homecoming, at least initially, but for Stephen it is disastrous: his little daughter appears to be autistic, incapable of speech or contact, while his wife, Diana, unable to bear this situation, has disappeared, her house being looked after by the widowed Clarissa Oakes.

Much of The Commodore takes place on land, in sitting rooms and in drafty castles, but the roar of the great guns is never far from our hearing. Aubrey and Maturin are sent on a bizarre decoy mission to the fever-ridden lagoons of the Gulf of Guinea to suppress the slave trade. But their ultimate destination is Ireland, where the French are mounting an invasion that will test Aubrey's seamanship and Maturin's resourcefulness as a secret intelligence agent.

The subtle interweaving of these disparate themes is an achievement of pure storytelling by one of our greatest living novelists.

The Commodore is so satisfying...because it is crowded with so many different kinds of pleasures. O'Brian's genius is in his ability to arrange all this material upon the well-constructed frame of an adventure plot....A lyric poet working in the epic form.