The End of Alchemy: Money, Banking, and the Future of the Global Economy (Paperback) 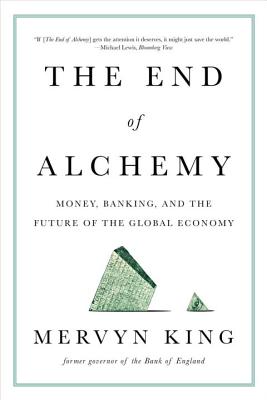 “If [The End of Alchemy] gets the attention it deserves, it might just save the world.” —Michael Lewis, Bloomberg View

Something is wrong with our banking system. We all sense that, but Mervyn King knows it firsthand; his ten years at the helm of the Bank of England, including at the height of the financial crisis, revealed profound truths about the mechanisms of our capitalist society. In The End of Alchemy he offers us an essential work about the history and future of money and banking, the keys to modern finance.

The Industrial Revolution built the foundation of our modern capitalist age. Yet the flowering of technological innovations during that dynamic period relied on the widespread adoption of two much older ideas: the creation of paper money and the invention of banks that issued credit. We take these systems for granted today, yet at their core both ideas were revolutionary and almost magical. Common paper became as precious as gold, and risky long-term loans were transformed into safe short-term bank deposits. As King argues, this is financial alchemy—the creation of extraordinary financial powers that defy reality and common sense. Faith in these powers has led to huge benefits; the liquidity they create has fueled economic growth for two centuries now. However, they have also produced an unending string of economic disasters, from hyperinflations to banking collapses to the recent global recession and current stagnation.

How do we reconcile the potent strengths of these ideas with their inherent weaknesses? King draws on his unique experience to present fresh interpretations of these economic forces and to point the way forward for the global economy. His bold solutions cut through current overstuffed and needlessly complex legislation to provide a clear path to durable prosperity and the end of overreliance on the alchemy of our financial ancestors.

Mervyn King, former governor of the Bank of England, teaches at New York University and the London School of Economics.

An outstandingly lucid account of postwar economic policymaking and the dilemmas we now face. . . . It is rare to encounter a book on economics quite as intellectually exhilarating as The End of Alchemy—a dazzling performance indeed.

I have read umpteen books about the financial crisis of 2007–2008 and its lessons. This is the cleverest one, brimming over with new ideas. While other ‘lords of finance’ publish memoirs, King has produced a brilliant analysis not only of what went wrong in the global financial system but also of what went wrong in economics itself.
— Niall Ferguson

A sophisticated and highly approachable study of how modern finance has lost its way. Few individuals are more qualified than Lord Mervyn King to imagine the banking of the future. His book should be required reading.
— Henry Kissinger

Mervyn King asks, ‘Why has almost every industrialized country found it difficult to overcome the stagnation that followed the financial crisis in 2007–2008, and why did money and banking, the alchemists of a market economy, turn into its Achilles heel?’ He addresses these questions, and much more. For those endeavoring to understand the greatest financial crisis of our time and the future of finance, this highly provocative book is a must-read.
— Alan Greenspan

Drawing on years of scholarly study of banking history and his real world experience in fighting financial panic, Mervyn King has set out a new framework for monetary and financial reform. Seemingly simple in concept, it challenges prevailing banking and market practice. The End of Alchemy demands debate and a well-reasoned response.