The Book of Accidents: A Novel (Paperback) 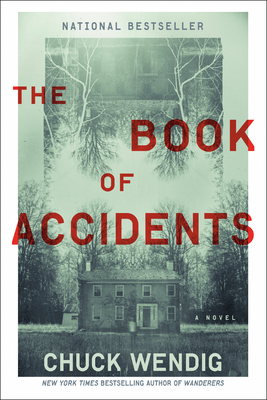 I am at a loss for how to succinctly describe this bizarre, scary book, but let me try. There are multiple universes, and a person traveling through them systematically murdering the same person over and over, attempting to bring about the end of days. Also there is a serial killer flickering between worlds with revenge on the brain. Also there is a teenage boy dealing with bullies and trying to figure out his strange new friend. There is strange magic and terrifying characters and weird occurrences and horrifying imagery, and it all fits together in a way that only Chuck Wendig could achieve. This book is weird and terrifying and awesome. Just trust me.

“Despite the classically creepy content of a true horror tale, I found myself devouring these pages before going to sleep at night and seeking them out again first thing in the morning, nightmares be damned.”
— Sara Knight, Maria's Bookshop, Durango, CO

LOCUS AWARD FINALIST • “The dread, the scope, the pacing, the turns—I haven’t felt all this so intensely since The Shining.”—Stephen Graham Jones, New York Times bestselling author of The Only Good Indians

ONE OF THE BEST BOOKS OF THE YEAR: The New York Public Library, Library Journal

Long ago, Nathan lived in a house in the country with his abusive father—and has never told his family what happened there.

Long ago, Maddie was a little girl making dolls in her bedroom when she saw something she shouldn’t have—and is trying to remember that lost trauma by making haunting sculptures.

Long ago, something sinister, something hungry, walked in the tunnels and the mountains and the coal mines of their hometown in rural Pennsylvania.

Now, Nate and Maddie Graves are married, and they have moved back to their hometown with their son, Oliver.

And now what happened long ago is happening again . . . and it is happening to Oliver. He meets a strange boy who becomes his best friend, a boy with secrets of his own and a taste for dark magic.

This dark magic puts them at the heart of a battle of good versus evil and a fight for the soul of the family—and perhaps for all of the world. But the Graves family has a secret weapon in this battle: their love for one another.

Chuck Wendig is the New York Times bestselling author of Wanderers, Star Wars: Aftermath, the Miriam Black thrillers, the Atlanta Burns books, and Zer0es and Invasive, alongside other works across comics, games, film, and more. He was a finalist for the Astounding Award for Best New Writer and an alum of the Sundance Screenwriters Lab, and he served as the co-writer of the Emmy-nominated digital narrative Collapsus. He is also known for his popular blog, terribleminds, and books about writing such as Damn Fine Story. He lives in Pennsylvania with his family.

“[The Book of Accidents] is Chuck Wendig’s magnum opus, blazing with imagination, humanity, and a tiny glimmer of hope for a world drowning in cruelty. It’s horror for right now, and it’s Wendig’s best so far.”—Christopher Golden, New York Times-bestselling author of Road of Bones

“Only Chuck Wendig can blend horror, fantasy, and science fiction into a propulsive thriller that is as funny as it is frightening, clever as it is uncanny, tender as it is terrifying. A magical ride.”—Alma Katsu, author of Red Widow and The Deep

“Chuck Wendig’s The Book of Accidents transported me to the golden age of sprawling horror novels that I loved so much as a kid. Sweeping yet intimate, multilayered and bighearted, this is a novel to sink deeply into.”—Dan Chaon, New York Times bestselling author of Ill Will

“In the tradition of Stephen King’s Dark Tower books, Wendig views the cosmic and terrifying through the lens of the domestic, anchoring his visions of the sublime in the grit of the familiar. The result is a novel to ramble around in, to get lost in.”—John Langan, author of Children of the Fang and Other Genealogies

“An unforgettable, terrifying dose of top-flight horror that hits on our most basic core fears, The Book of Accidents chills you to the bone while still warming your heart.”—Alex Segura, author of Star Wars Poe Dameron: Free Fall and Miami Midnight

“With a story both universally horrifying and viscerally intimate, Wendig brilliantly uses The Book of Accidents to explore a painful truth: In the end, we all haunt ourselves. I couldn’t get through the pages fast enough.”—Kiersten White, New York Times bestselling author of The Dark Descent of Elizabeth Frankenstein

“Move over King, Chuck Wendig is the new voice of modern American horror. The Book of Accidents is a masterwork, and Chuck is only just getting started.”—Adam Christopher, author of Stranger Things: Darkness on the Edge of Town