Beauty Like the Night (The Spymaster Series #6) (Mass Market) 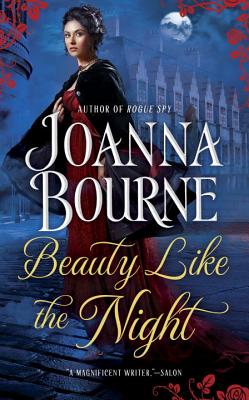 This is book number 6 in the The Spymaster Series series.

In the newest Spymaster novel, “master of romance and suspense”* Joanna Bourne offers a stirring tale of intrigue, espionage, and attraction.

Séverine de Cabrillac, orphan of the French revolution and sometime British intelligence agent, has tried to leave spying behind her. Now she devotes herself to investigating crimes in London and finding justice for the wrongly accused.

Raoul Deverney, an enigmatic half-Spaniard with enough secrets to earn even a spy's respect, is at her door demanding help. She's the only one who can find the killer of his long-estranged wife and rescue her missing twelve-year-old daughter.

Séverine reluctantly agrees to aid him, even though she knows the growing attraction between them makes it more than unwise. Their desperate search for the girl ​unleashes treason and murder. . . and offers a last chance for two strong, wounded people to find love.

Joanna Bourne is the award-winning author of Rogue Spy, The Black Hawk, The Forbidden Rose, My Lord and Spymaster, and The Spymaster’s Lady. She has always loved reading and writing romance. She's drawn to Revolutionary and Napoleonic France and Regency England because, as she puts it, “It was a time of love and sacrifice, daring deeds, clashing ideals, and really cool clothing.”  She's lived in seven different countries, including England and France, the settings of the Spymaster series.

Praise for Joanna Bourne and her novels

"What a terrific story! One of the most unusual, resourceful, and humorous heroines I've ever met, a spy to swoon for, and a great twisty plot with a sense of genuine danger."—Diana Gabaldon, #1 New York Times bestselling author