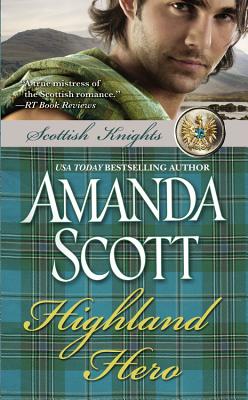 This is book number 2 in the Scottish Knights series.

Lady Marsi Cargill refuses to marry a man who wants her land rather than her love. To escape her arranged betrothal, she disguises her noble lineage and accompanies her young cousin--the future King of Scots--on a secret journey across the Highlands. Their guide is a mysterious knight known only as Hawk. Heat flares between the beautiful maid and the brooding warrior, but when Marsi's true identity is revealed, Hawk's desire gives way to fury...

KNIGHT AT THE READY

Summoned by the King to guard his son, Sir Ivor "Hawk" Mackintosh now has two royals to protect. This daring, willful woman has invaded Hawk's every thought, and laid siege to his heart. Soon the solitary soldier is yearning for a life with Marsi at his side and in his bed. But as their passion grows, so too does the danger surrounding them. Powerful enemies watch their every move, and to survive, Hawk and Marsi must fight for Scotland's future-as well as their own new-found love.

Amanda Scott is the author of over 62 romance novels and the recipient of the Romance Writers of America's prestigious RITA Award. She lives in Folsom, California, outside of Sacramento. She is a fourth-generation Californian.

"Amanda Scott has done it again - provided us with an exciting, adventurous tale set in Scotland."—Romance Reviews Magazine on HIGHLAND HERO

"Her colorful characters and their inter-relationships will absorb readers, while her plotting, dialogue and narration are also excellent. She's a true master of the Scottish historical romance."—Romance Reviews Today on HIGHLAND HERO

"The settings and cultural feel authentic; readers who appreciate history will be sucked right in."—Wickedly Bookish on HIGHLAND HERO

"As always in an Amanda Scott historical the inclusion of real persona and facts enhances the romance; while treachery and betrayal are a normal part of the court."—Harriet Klausner on HIGHLAND HERO

"TOP PICK! Scott's story is a tautly written, fast-paced tale of political intrigue and treachery that's beautifully interwoven with history. Strong characters with deep emotions and a high degree of sensuality make this a story to relish."—RT Book Reviews on HIGHLAND HERO

"Great with sensual scenes, Scott escapes the cliche of a masterful male taming a 'wildcat' woman; instead, Fin and Catriona learn to communicate and compromise in this solid romantic adventure....Scott...deftly handles period dialogue and attitudes."—Publishers Weekly on HIGHLAND MASTER

"5 H's -- for 'HOT' ! Scott, known and respected for her Scottish tales, has once again written a gripping romance that seamlessly interweaves history, a complex plot and strong characters with deep emotions and a high degree of sensuality. The mix of political intrigue and romance makes for a highly satisfying page-turner you won't be able to put down....The political machinations and Fin's attempts to protect Cat result in a surprising climax."—RT Reviews on HIGHLAND MASTER

"Blue-ribbon rating - 4 ! Deliciously sexy....Highland Master is a rare treat of a read."—romancejunkies.com on HIGHLAND MASTER

"[Scott] uses her knowledge of Scottish history to weave an engrossing and sexy story about Highland life in the 1400s."—Robert Walch, The Salinas Californian on HIGHLAND MASTER