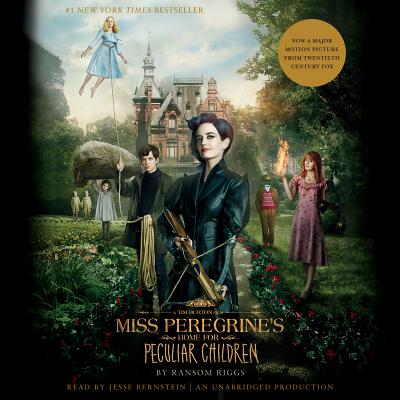 By Ransom Riggs, Jesse Bernstein (Read by)
$19.99
OUT OF PRINT: Email or call for price

“The search for his grandfather's past leads Jake to a remote island off the coast of Wales, where a home for orphaned and 'peculiar' children once stood. Jake's grandfather's stories -- about invisible children, children who can command fire, children with enormous strength, and the monsters who hunt them -- can't possibly be true, but Jake's search of the island proves otherwise. This well-wrought story has just the right amount of suspense, scare-your-pants-off detail, and smart, compassionate children searching for a path forward in a twisted, topsy-turvy world.”
— Connie Brooks, Battenkill Books, Cambridge, NY

It all waits to be discovered in Miss Peregrine’s Home for Peculiar Children, an unforgettable novel that mixes fiction and photography in a thrilling reading experience. As our story opens, a horrific family tragedy sets sixteen-year-old Jacob journeying to a remote island off the coast of Wales, where he discovers the crumbling ruins of Miss Peregrine’s Home for Peculiar Children. As Jacob explores its abandoned bedrooms and hallways, it becomes clear that the children were more than just peculiar. They may have been dangerous. They may have been quarantined on a deserted island for good reason. And somehow—impossible though it seems—they may still be alive.   A spine-tingling fantasy illustrated with haunting vintage photography, Miss Peregrine’s Home for Peculiar Children will delight adults, teens, and anyone who relishes an adventure in the shadows.

Includes a bonus PDF of photographs and letters from the book


“A tense, moving, and wondrously strange first novel. The photographs and text work together brilliantly to create an unforgettable story.”—John Green, New York Times best-selling author of The Fault in Our Stars

“‘Peculiar’ doesn’t even begin to cover it. Riggs’ chilling, wondrous novel is already headed to the movies.”—People

“You’ll love it if you want a good thriller for the summer. It’s a mystery, and you’ll race to solve it before Jacob figures it out for himself.”—Seventeen

Ransom Riggs is the author of Miss Peregrine’s Home for Peculiar Children (Quirk, 2011), a New York Times best seller, as well as its best-selling sequels Hollow City (Quirk, 2013) and Library of Souls (Quirk, 2015). He lives in Santa Monica, CA, with his wife.