Children of Ash and Elm: A History of the Vikings (Hardcover) 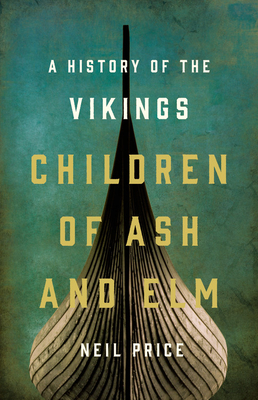 The definitive history of the Vikings -- from arts and culture to politics and cosmology -- by a distinguished archaeologist with decades of expertise
The Viking Age -- from 750 to 1050 -- saw an unprecedented expansion of the Scandinavian peoples into the wider world. As traders and raiders, explorers and colonists, they ranged from eastern North America to the Asian steppe. But for centuries, the Vikings have been seen through the eyes of others, distorted to suit the tastes of medieval clerics and Elizabethan playwrights, Victorian imperialists, Nazis, and more. None of these appropriations capture the real Vikings, or the richness and sophistication of their culture.
Based on the latest archaeological and textual evidence, Children of Ash and Elm tells the story of the Vikings on their own terms: their politics, their cosmology and religion, their material world. Known today for a stereotype of maritime violence, the Vikings exported new ideas, technologies, beliefs, and practices to the lands they discovered and the peoples they encountered, and in the process were themselves changed. From Eirík Bloodaxe, who fought his way to a kingdom, to Gudrid Thorbjarnardóttir, the most traveled woman in the world, Children of Ash and Elm is the definitive history of the Vikings and their time.

Neil Price is distinguished professor and chair of archaeology at Uppsala University, Sweden. He has been researching, teaching, and writing on the Vikings for nearly thirty-five years and is the author of several books on the history of the Viking Age. He lives in Sweden.

"A thrilling read....The stereotype of the Viking that we know from history books and popular media is here dismantled and presented anew by Mr. Price in all its wonderful, terrifying complexity and ambiguity. By clarifying the long-reaching effects of Scandinavian influence, Children of Ash and Elm brings a dramatically altered understanding of the Viking Age to a wider international audience."—Wall Street Journal

“Not the least of Price’s achievement is to rescue Viking history from the grasp of white supremacists who claim a specious lineage with it. He does so not by asserting any sort of moral superiority for the Vikings—theirs was a brutal society that practiced human sacrifice and slavery, as Price makes abundantly clear—but by restoring their rich and strange particularity….I’ll long remember Price’s evocation of the wafer-thin squares of gold, stamped with images of otherworldly beings, that adorned the great halls where visitors drank and fought and recited poetry. Firelight would have animated those static images. Price has done something similar here.”—Margaret Talbot, The New Yorker, The Best Books We Read in 2020

“Price, a Sweden-based archaeologist and academic, is adept at bringing this cosmopolitan and brutal world to life, interweaving many complicated strands of history with his own experience in the field along with poetic meditations on a people and time long since passed.”
—Rhian Sasseen, Paris Review (Staff Pick)

"As Neil Price shows in his colorful, revelatory new book, we are almost always looking at the Vikings the wrong way around.... He may know more about medieval Scandinavia than anyone else alive, and he aims to show us these fascinating people as they saw themselves, not as they were perceived by those on the sharp end of their robbery.... Thousands of books have been published about the Vikings -- this is one of the very best."—Sunday Times (UK)

“Scholarly, colourful and often remarkably funny, this is history at its very best, a richly decorated window on to a very strange world.”—The Times (UK), Best History Book of the Year

“Not only a leading authority on the period, Price is also a wonderful writer, by turns philosophical, witty, lyrical and poignant. He possesses both an archaeologist’s ability to interpret large quantities of scholarship and data, and the skill to translate it creatively. His vivid prose illuminates both the physical and the psychological dimensions of the early medieval north, while at the same time leaving space for uncertainty: the possibility of future discoveries and theories that will alter the picture yet again…. The writing hums with life as Price summons up the voices of the past.”—Guardian

“A wonderful read, with prose that flows like poetry in places and modern analogs that inspire creative thinking....This volume would make an excellent textbook and a splendid introduction to the world of the Vikings for any reader.”
—Science

"I fell in love with Neil Price's comprehensive new history of the Vikings.... [Price] hits major high points, while also introducing nonspecialists to the major questions that those who know a lot about Vikings still consider unresolved.... Dazzle[s] the reader with cinematic detail."—Slate

“A profound meditation on culture, ritual and what it means to be human.”—Allegra Goodman, The Week

“Outstanding….This is as much a history of mindsets as of significant names and dates….Price constructs a very human history of the period….Yield[s] new insights into the complex nature of Viking culture.”
—Literary Review (UK)

“A comprehensive, lyrically told and personal account of the Viking Age….No other history of the Vikings is as vibrant or expands the scope of the Viking world to encompass not just landscapes, but mindscapes.”—Times Literary Supplement

“Copious documentation and the latest archaeological findings gird a new history of the Vikings, which broadens the narrative beyond the violent warrior image. Neil Price explores what is known about Viking society and culture, and its impact on the peoples and lands that were conquered.”—Christian Science Monitor

“Price fleshes out Viking culture, often by focusing on the material realities of their day-to-day lives....What Price attempts to do with Children of Ash and Elm is to strip away the cultural sediment that has built up around the idea of the Vikings and return us to the archaeological record itself....What we’re left with are fewer illusions and a much more interesting mystery.”—Washington Examiner

“A wide-ranging and engaging account of the Viking Age. Never shirking from the cruelties enacted by the Vikings, Price has a knack for picking up on prosaic details to tell a bold story of a society dramatically different from our own.”—Jóhanna Katrín Friðriksdóttir, History Today

“Neil Price has spent his career excavating Viking-era artifacts and remains. Now the chair of archeology at the Swedish university at Uppsala, this English-born academic reveals a knack too few in his field share. Over 500 pages of narrative, he skillfully blends extended discussions of the recent finds at settlement and burial sites with his own anecdotes, reflections and investigations.”—Spectrum Culture

“Thorough, readable....Serves as a model for how modern science can add to historical scholarship and storytelling. The research is thoroughly documented and the book well-illustrated.”
—New York Journal of Books

“This spectacular book is more than traditional history, as many of its surprising–often strange–revelations about Viking life come not from texts, but archaeology. Price guides us through their vast world, studding his grand narrative with extraordinary details: isotopic identification of Scandinavian skeletons in Russia, silk caps from York and Lincoln probably from the same Byzantine bale, and a candle burning until the air inside a burial chamber ran out.”
—BBC Science Focus (UK), Best Books We Read in 2020

“Children of Ash and Elm is the culmination of decades of academic writing and field research by Price. It is a broadly accessible, archaeologically informed account of one of the most deeply mythologized groups in human history.”—Russell Kirk Center

“Capturing the full and rich nuances of the Viking Age, Neil Price's Children of Ash and Elm offers a sweeping account of the famous Scandinavian culture that stretched from North America to the Asian Steppes....Price relies on archeological and textual evidence to move past stereotypes and reveal the Vikings as never before.”—Explore the Archive, 12 Best History Books of 2020

“One of the most comprehensive treatises on the Norse to date….This book brings together a wide body of scholarship that makes the world of the Vikings all the more comprehensible.”
—The Explorers Journal

“Price brings an enthusiastic, encyclopaedic knowledge to the Viking Age....Children of Ash and Elm will reward the casual reader as well as serve the serious student looking for a better understanding of who the Vikings were, what drove them, and the effects they had on the world around them.”
—Winnipeg Free Press

“A comprehensive and highly readable history of the Vikings.”
—Swedish Press

“This book is the closest thing I have found to a time machine. It brilliantly clears the fog of the past from the Viking era. Extremely well written…if you are seeking an accessible, yet definitive and up-to-date book on the Vikings, this is the one you want.”
—Norwegian American

"Majestic.... Children of Ash and Elm illuminates the brutal realities of Viking raids, of course, but its revelatory power comes from its focus on the culture that built and launched those ships, an industrial feat more impressive than the pillaging.... Price's stripping away of Viking cliché still leaves warriors worthy of the songs -- they're just people now, too."—Shelf Awareness

"The breadth and thoroughness of Price's research impresses. Readers interested in Viking culture should consider this monumental history a must-read."—Publishers Weekly

"An immense undertaking from an expert who has studied the Vikings for almost 35 years, this is a masterful piece of work that seeks to present the historical Vikings as distinct from the caricatures of pop culture.... An engaging and engrossing read. Exhaustively researched using cross-disciplinary resources, this breathtaking, epic history will appeal to all types of readers."—Library Journal

"As vivid as it is learned, as thrillingly cutting edge as it is deep-rooted in the distant past, this is as brilliant a history of the Vikings as one could possibly hope to read."—Tom Holland, author of Dominion: How the Christian Revolution Remade the World

"Neil Price offers a spirited account of the Vikings from unexpected angles, and brilliantly succeeds in seeing the world from their perspective rather than from that of the people whose lands suffered from Viking raids. He shows that this was a world in which gods, spirits and humans co-existed and one in which the savagery of warfare was counter-balanced by peaceful settlement as far away as Greenland and briefly North America."—David Abulafia, professor emeritus of Mediterranean history, University of Cambridge, and author of The Boundless Sea: A Human History of the Oceans