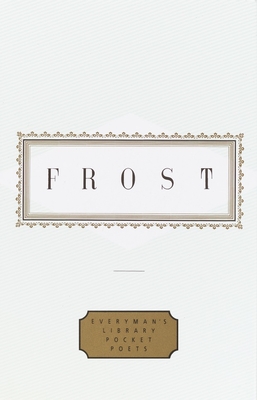 From one of the most brilliant and widely read of all American poets, a generous selection of lyrics, dramatic monologues, and narrative poems--all of them steeped in the wayward and isolated beauty of Frost's native New England. Includes his classics "Mending Wall, " "Birches, " and "The Road Not Taken, " as well as poems less famous but equally great.

Robert Lee Frost was born in San Francisco in 1874. When he was ten, his father died and he and his mother moved to New England. He attended school at Dartmouth and Harvard, worked in a mill, taught, and took up farming, before he moved to England, where his first books of poetry, A Boy’s Will (1913) and North of Boston (1914), were published. North of Boston brought him recognition as the preeminent voice of New England and as one of America’s major poets. In 1915 he returned to the United States and settled on a farm in New Hampshire. Four volumes of his poetry, New Hampshire (1923), Collected Poems (1930), A Further Range (1936), and A Witness Tree (1942) were all awarded the Pulitzer Prize. He died in 1963.