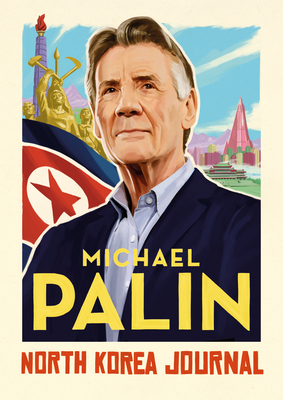 By Michael Palin
$24.50
OUT OF PRINT: Email or call for price

If you were lucky enough to have seen and/or read any of Palin's other travelogs, you will know what to expect here. From the trip's inception through to its end, the author spoons out observations about his tour of the country. Known for his cheekiness, Palin is nonetheless serious about his task of conveying the sights and sounds of this mostly forbidden place. He cannot help but make humorous asides, though, since North Korean society seems to be trapped in a time warp; the differences between North and South, Communist and free states, are so jarring that they elicit bemusement.

I happened to listen to this as an audio book from Libro.fm. Palin's warm voice was inviting and welcome. North Korean Journal is a pleasant way to spend a few hours of your day.

In this beautifully illustrated journal based on a TV documentary, writer, comedian and world traveller Michael Palin journeys to North Korea, offering a glimpse of life inside the world's most secretive country, uncovering surprises and making friends along the way.

In May 2018, former Monty Python stalwart and intrepid globetrotter Michael Palin ventured into the Democratic People's Republic of Korea, camera crew in tow, to gain a glimpse of life in the most notoriously secretive and cut-off nation on earth. His resulting two-part documentary for Channel 5 fascinated millions and won universal plaudits.

Now he shares the journal he meticulously kept during his trip, in which he describes his experiences in a country wholly unlike any other he has ever visited: a country where you will find the Tallest Unoccupied Building in the World; where the residents of Pyongyang awake every morning to the strains of 'Where Are You, Dear General?', broadcast from speakers across the city; and where there are fifteen approved styles of haircut. He chronicles a journey of stark contrasts that takes in a gleamingly modern capital complete with triumphal statues and arches one day, and a countryside that has barely changed in decades on another. He travels to the heavily fortified Demilitarized Zone, to a centuries-old Confucian academy, and to the heart of North Korea's exquisitely beautiful mountains and lakes. He recounts conversations with official guides, teachers, propaganda artists, farmers and soldiers in which mutual incomprehension and shared humanity are constantly intermingled. And he muses on what makes people tick under a regime that to outsiders seems so utterly alien and so grimly authoritarian.

Written with Palin's trademark warmth and wit, and illustrated with beautiful colour photographs throughout, Palin's journal offers a rare insight into the North Korea behind the headlines.

MICHAEL PALIN has written and starred in numerous TV programmes and films, from Monty Python and Ripping Yarns to A Fish Called Wanda and The Death of Stalin. He has also made several much-acclaimed travel documentaries, his journeys taking him to the North and South Poles, the Sahara Desert, the Himalayas, Eastern Europe and Brazil. His books include accounts of his journeys, novels (Hemingway's Chair and The Truth), several volumes of diaries and Erebus: One Ship, Two Epic Voyages, and the Greatest Naval Mystery of All Time. From 2009 to 2012 he was president of the Royal Geographical Society. In 2018 he was the inaugural recipient of the Royal Canadian Geographical Society's Louie Kamookak Medal. He received a BAFTA fellowship in 2013, and a knighthood in the 2019 New Year Honours list. He lives in London.

PRAISE FOR MICHAEL PALIN AND HIS PREVIOUS BOOK, EREBUS:

“Palin is a gifted storyteller and has an unerring eye for illuminating anecdotes. His gripping account of the voyage of Erebus to Antarctica is particularly good and details an important period that will not be as familiar for many Franklin students. Palin’s treatment of work and daily life aboard the ships is engrossing.” —Canada’s History

“Michael Palin has written a rollicking biography of the legendary ship, told through the lives (and deaths) of the people who manned her on explorations of Antarctica and the Arctic. With this irresistible, sometimes funny and often harrowing account, he makes a convincing case that this one heroic little ship embodies the golden age of polar exploration better than any other.” —John Geiger, CEO of The Royal Canadian Geographical Society, Canadian Geographic

“An extraordinary book. . . . The little-known tale of the southern voyage, based on copious surviving records, is enthralling, but it’s Palin’s refusal to speculate on the thoughts and emotions of the 129 men aboard Franklin’s two ships before the last of them died that gives Erebus an eerie resonance.” —Maclean’s

“At once breezy and gripping. . . . [Palin’s] writing tone is conversational, skeptical, frequently on the lookout for the humorous. . . . It’s this kind of detail of everyday activity in an otherworldly environment that makes Erebus so intriguing. Palin is at his best when describing the rituals of life on board an isolated and cramped space.” —The Globe and Mail

“Beyond terrific. I didn’t want it to end.” —Bill Bryson

“What more could a reader ask for? Fascinating mystery, chilling adventure, compelling characters—one a powerful woman, another made of wood and sails—and simply terrific writing by Michael Palin.” —Roy MacGregor

“One robust little tub of a boat, two death-defying voyages to the ends of the earth. Palin has given us a fascinating account of the extraordinary courage of nineteenth-century British sailors and officers. Even the sturdiest vessel is dependent on luck, climate and its captain’s skills as he faces ferocious weather, and Palin illuminates with enthusiasm and respect this chilly history of a bomb ship that made its name first as a polar pioneer and then later as a watery tomb. Enthralling.” —Charlotte Gray

“At this late date, and against all odds, Michael Palin has found an original way to enter and explore the Royal Navy narrative of polar exploration. Palin is a superb stylist, low-key and conversational, who skillfully incorporates personal experience. He turns up obscure facts, reanimates essential moments, and never shies away from taking controversial positions. This beautifully produced volume—colour plates, outstanding maps—is a landmark achievement.” —Ken McGoogan