Fight, Magic, Items: The History of Final Fantasy, Dragon Quest, and the Rise of Japanese RPGs in the West (Paperback) 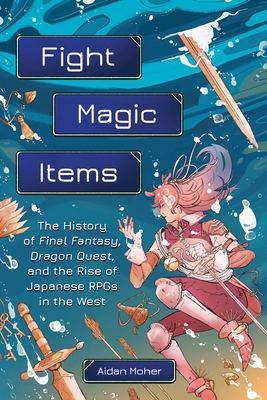 Take a journey through the history of Japanese role-playing games—from the creators who built it, the games that defined it, and the stories that transformed pop culture and continue to capture the imaginations of millions of fans to this day.

The Japanese roleplaying game (JRPG) genre is one that is known for bold, unforgettable characters; rich stories, and some of the most iconic and beloved games in the industry. Inspired by early western RPGs and introducing technology and artistic styles that pushed the boundaries of what video games could be, this genre is responsible for creating some of the most complex, bold, and beloved games in history—and it has the fanbase to prove it. In Fight, Magic, Items, Aidan Moher guides readers through the fascinating history of JRPGs, exploring the technical challenges, distinct narrative and artistic visions, and creative rivalries that fueled the creation of countless iconic games and their quest to become the best, not only in Japan, but in North America, too.

Moher starts with the origin stories of two classic Nintendo titles, Final Fantasy and Dragon Quest, and immerses readers in the world of JRPGs, following the interconnected history from through the lens of their creators and their stories full of hope, risk, and pixels, from the tiny teams and almost impossible schedules that built the foundations of the Final Fantasy and Dragon Quest franchises; Reiko Kodama pushing the narrative and genre boundaries with Phantasy Star; the unexpected team up between Horii and Sakaguchi to create Chrono Trigger; or the unique mashup of classic Disney with Final Fantasy coolness in Kingdom Hearts. Filled with firsthand interviews and behind-the-scenes looks into the development, reception, and influence of JRPGs, Fight, Magic, Items captures the evolution of the genre and why it continues to grab us, decades after those first iconic pixelated games released.

Aidan Moher is a Hugo Award-winning writer and editor who has written about almost every niche facet of geek culture you can think of from Terry Brooks to Dungeons & Dragons. And whether he’s penning wildly read essays on Lunar: Silver Star Story, the undeniable lasting power of Chrono Trigger (the best RPG ever made), or the forgotten history of Magic the Gathering, he manages to infuse deep, personal, endearing hooks into every story he tells. He’s written for outlets like Wired, Kotaku, Electronic Gaming Monthly, Uncanny Magazine, Fanbyte, Tor.com, and more.