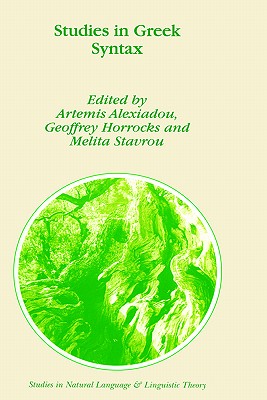 3 On the other hand, others have pointed out that preverbal subjects are at least par tially distinct from other topicalised constituents in displaying residual properties characteristic of items in an A-position (Horrocks 1994). Although there is a general consensus that inverted orders as in (lb-c) arise when the verb occupies a slot higher than the structural position hosting the subject, in the light of an articulated INFL projection (see below), there is no agreement concerning the nature of the head hosting the verb, the nature of the projection host ing the subject and whether or not an expletive is required. Greek has no infinitives. All its moods (indicative, subjunctive, imperative) are expressed by fmite forms throughout; specifically, the 'subjunctive' mood consists of the particle na plus fully inflected forms of the verb, being the common translational equivalent of the English infmitive. A number of researchers have analysed na as a subjunctive marker (Philippaki-Warburton & Veloudis 1984, Terzi 1992, Rivero 1994 among others), while others have argued that it behaves like a complementizer (Agouraki 1991, Tsoulas 1993). We will return to the properties of na-clauses later on. (3) a. thelo na fIjis Subjunctive want-lsg subj go-2sg 'I want you to go' b. Fije Imperative go-2sg 'Go ' There is also an indeclinable verbal form, the so-called gerund or active participle.