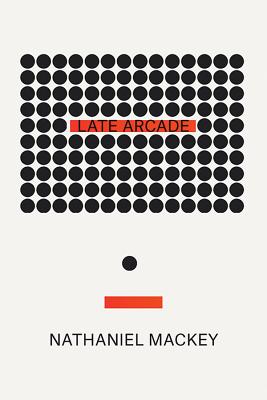 By Nathaniel Mackey
$16.95
OUT OF PRINT: Email or call for price

Nathaniel Mackey’s Late Arcade opens in Los Angeles. A musician known only as N. writes the first of a series of letters to the enigmatic Angel of Dust. N.’s jazz sextet, Molimo m’Atet, has just rehearsed a new tune: the horn players read from The Egyptian Book of the Dead with lips clothespinned shut, while the rest of the band struts and saunters in a cosmic hymn to the sun god Ra. N. ends this breathless session by sending the Angel of Dust a cassette tape of their rehearsal.

Over the next nine months, N.’s epistolary narration follows the musical goings-on of the ensemble. N. suffers from what he calls “cowrie shell at- tacks”—oil spills, N.’s memory of his mother’s melancholy musical Sundays— which all becomes the source of fresh artistic invention.

Nathaniel Mackey was born in Miami, Florida in 1947. He is the author of several books of poetry, fiction, and criticism, and has received many awards for his work, including the National Book Award in poetry for Splay Anthem, the Stephen Henderson Award from the African American Literature and Culture Society, and the Bollingen Prize from the Beinecke Library at Yale University. Mackey is the Reynolds Price Professor of English at Duke University, and edits the literary journal Hambone.

A literary adventure of the highest order, a feat of prose and imagination that takes the fiction genre into new territory. Once of the most memorable meetings of prose and jazz in English literature."
— Florence Wetzel - All About Jazz

Mackey has now written close to one thousand pages of fiction about
music that does not exist....What is so revolutionary about it, still,
is the way Mackey makes the pain of this absence into the occasion for
renewing a love of language, of redirecting our ears toward the
page...[His] handling of history is subtle and immaculate.
— BOMB Magazine

Mackey
isn’t simply playing the part of a poet
recounting jazz, he’s fully engaged
in the creation of its written iteration,
his script a study of rhythm, flow,
freedom and, yes, discipline, his
words as expressive and imaginative
as Coltrane’s or Coleman’s most
deviously-conceived notes.
— Spencer Grady - Jazzwise

Through the treatment of avant-garde jazz as sonically improvised sentences, Nathaniel Mackey’s, Late Arcade, exhibits a boundless and complicated metamorphosis in which musicality becomes the very language which attempts to describe it. An eight month series of letters written by N. to a peculiar confidant known as, “The Angel of Dust,” relays the appearance of mystical, if not erotically charged, balloons, whose ability to share the subjective experiences of N.’s bandmates results in both performances and identities gaining a greater sense of cosmic locality. Instead of accepting the casual clichés which plague musical writing, Mackey adapts a set of stylistics which are uniquely his own: much like those breaths which are prodigiously pushed out of a tenor, a trumpet, or an oboe, the words read as chaotic, harmonious, suspensions of the spirit which one must hear before they may fully inhabit.
— Bennet S. Johnson - Literati Bookstore, Ann Arbor, MI