The New York Grimpendium: A Guide to Macabre and Ghastly Sites in New York State (Paperback) 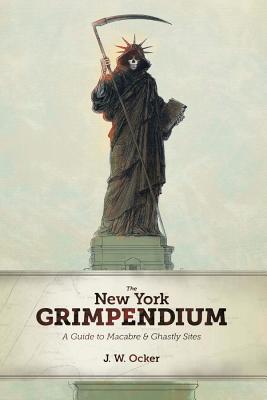 From the author of The New England Grimpendium comes a new travelogue and insider’s guide to wicked, weird, wonderful New York.

When J. W. Ocker’s first book, The New England Grimpendium, emerged on the scene, Max Weinstein of Fangoria.com called it “a travelogue for those who revel in the glory of their nightmares.” Rick Broussard at New Hampshire Magazine said of it, “I’ve read a dozen books about New England ghosties and weirdnesses, and this one is my favorite. It’s also one of the few that actually came up with stuff I didn’t already know about.” Now the author of that Lowell Thomas Award winner has unearthed hundreds of similarly creepy and colorful places in the Empire State that will make your skin crawl and your hair stand on end! Ocker’s essays on these places, some little known, some area landmarks, include directions and site information along with entertaining anecdotes delivered in his signature wry style. It’s definitely a wild ride from a jar full of the harvested brains of dead killers to horror movie filming sites around the state; from a ships’ graveyard to lake monster sightings. If it’s in New York and it’s bizarrely noteworthy or wonderfully wacky, you’ll find it in The New York Grimpendium.

J. W. Ocker is the Edgar Award-winning author of Poe-Land. He runs the website Odd Things I’ve Seen, where he chronicles his visits to various oddities of culture, art, and history. His writing has been featured in Rue Morgue magazine, CNN.com, American Exorcist: Critical Essays on William Peter Blatty, and Studies in Australian Weird Fiction. Ocker lives in Nashua, NH.