Becoming a Democracy: How We Can Fix the Electoral College, Gerrymandering, and Our Elections (Paperback) 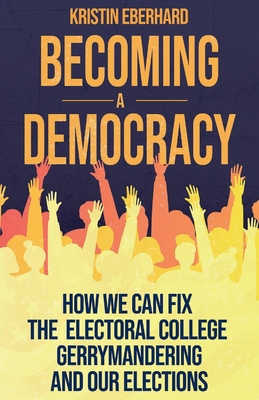 The United States wasn't built as a democracy. The Senate doesn't represent people. Both sides hate gerrymandering and the courts refuse to fix it. Our right to be heard is defeated by voter suppression and an Electoral College system that concentrates power in a handful of states and too often reverses the popular vote. But within our flawed system, we have the tools to tackle our most stubborn election problems by flexing state and local power (no constitutional amendments or courts required).

This should be the last American election that works against the people. Kristin Eberhard, Director of Democracy at Sightline Institute, thoughtfully researched how the U.S. election system is unjust to many by design, and walks us through 10 big but practical ideas for making our elections free, fair, and secure. Now is the time:

- More than half of Americans live in just nine states. That means less than half the population controls 82 percent of the Senate. It doesn't have to be that way. We can hope the Senate eliminates the filibuster. But while we're holding our breath, what if we went further and remade the Senate to represent people?
- Voter suppression justified by trumped up fears of double voting and dead voters – why? There's already a simple, proven solution working in 30 states to keep voter lists secure and accurate.
- Feel stuck with the Electoral College reversing the popular vote? That isn't even in the Constitution! There is a path for states to ensure the candidate with the most votes wins (and we're already on it).
- We could defeat gerrymandering and create a multi-party system where voters have more options, lawmakers get more work done, and extremists are relegated to the fringe, unable to take over a major party.

A field guide to better elections for both sides of the aisle, Becoming a Democracy illuminates the meaningful, concrete actions that can transform our elections and make sure everyone's vote counts (and that they get to vote in the first place).

Eberhard delves into the history and evolution of our flawed systems, showing their impact on voters the outcomes of our elections, and the perpetuation of racist policies.

- American voters aren't going to elect the American president. Twelve states are.
- One in every 13 Black adults could not vote as the result of laws limiting voting rights for people with felony convictions, as of 2016.
- Some 23 million American citizens who are eligible to vote could not exercise that right if all states had strict voter ID laws. More than one in ten voting-age citizens do not have a current, government-issued photo ID--if you're in a state with a strict Voter ID law, that means no vote.
- The Supreme Court cleared the way for states to purge 2 million voters from the rolls between 2012 and 2016.

She also shows how states across the country are changing all that with proven solutions for running fair elections and making every vote count.
- Thirty states are members of a secure and modern system to keep voter rolls clean. Together, they've removed more than 300,000 names of deceased voters from their rolls and updated addresses for nearly 10 million eligible voters.
- In the 2020 primary, Montana mailed ballots to all registered voters. It saw the highest voter turnout in more than 40 years.
- In the 2014 midterm elections, voter participation in Vote At Home states across the nation was on average 23 percent higher than in other states.
- In 2018, Maine voters used ranked ballots to elect members of Congress. A four-way race for a House seat would have elected someone with only minority support, but ranked choice voting elected the candidate with support from more than half of voters.

Kristin Eberhard is the Director of Sightline Institute's programs on Democracy and Climate. A lawyer by training, she is a sought-after public speaker and leading expert on electoral reform, vote by mail, and the inconsistent patchwork of states' election rules, and is considered an authority on proportional representation and carbon pricing. Eberhard taught courses on climate change and energy law at Stanford Law School and UCLA School of Law. She led the Natural Resources Defense Council (NRDC)'s climate work in California. Kristin graduated with honors from Stanford University, cum laude from Duke University School of Law, and earned a Masters of Environmental Management from Duke's Nicholas School of the Environment. She lives in Oregon, an all-vote by mail state.