Who Is Alex Trebek?: A Biography (Hardcover) 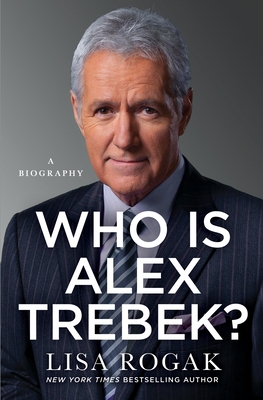 By Lisa Rogak
Email or call for price.
Out of Print

After a contestant wrote “We love you, Alex!” as his Final Jeopardy! answer, fans around the world quickly chimed in to proclaim their own love and support for beloved Jeopardy! host Alex Trebek. In the wake of his devastating cancer diagnosis, the moment provided the perfect opportunity to reflect on what the show — and the man – meant to them.

It was no surprise, since millions of devoted viewers have long considered Alex Trebek to be a part of their daily lives ever since he began hosting the show in 1984. Now, bestselling biographer Lisa Rogak gives readers a look at Trebek's early life, his career, and his personal life throughout the years, drawing on many sources to tell his full story for the first time.

There are many surprises, like the fact that Trebek was almost 50 when he discovered that he had a half brother, as well as the revelation that for a short time he actually dreamed of becoming a priest. The native Canadian also struggled with depression after the failure of his first marriage, and for years afterward he despaired of ever having a family of his own until he met the woman who would become his soulmate.

Who Is Alex Trebek? is the first biography of the much-loved game show host, and as such, celebrates the man who has created a remarkable legacy that will live on in popular culture for generations to come.

"Sprightly...Rogak’s heartfelt portrait acknowledges Trebek’s numerous contributions to the game show genre and masterfully illustrates how and why he remains a treasured entertainment icon." —Booklist