The Sun Does Shine (Young Readers Edition): An Innocent Man, A Wrongful Conviction, and the Long Path to Justice (Hardcover) 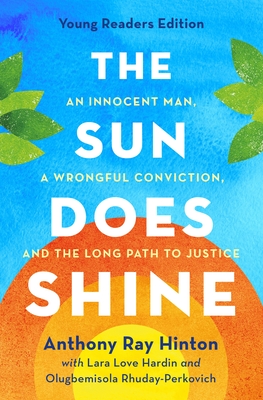 A Chicago Public Library Best Book of the Year

The Sun Does Shine is an extraordinary testament to the power of hope sustained through the darkest times, now adapted for younger readers, with a revised foreword by Just Mercy author Bryan Stevenson.

In 1985, Anthony Ray Hinton was arrested and charged with two counts of capital murder in Alabama. Stunned, confused, and only 29 years old, Hinton knew that it was a case of mistaken identity and believed that the truth would prove his innocence and ultimately set him free.

But with a criminal justice system with the cards stacked against Black men, Hinton was sentenced to death . He spent his first three years on Death Row in despairing silence—angry and full of hatred for all those who had sent an innocent man to his death. But as Hinton realized and accepted his fate, he resolved not only to survive, but find a way to live on Death Row. For the next twenty-seven years he was a beacon—transforming not only his own spirit, but those of his fellow inmates. With the help of civil rights attorney and bestselling author of Just Mercy, Bryan Stevenson, Hinton won his release in 2015.

With themes both timely and timeless, Hinton’s memoir tells his dramatic 30-year journey and shows how you can take away a man’s freedom, but you can’t take away his imagination, humor, or joy.

ANTHONY RAY HINTON spent nearly thirty years on death row for crimes he didn’t commit. Released in April 2015, Hinton now speaks widely on prison reform and the power of faith and forgiveness. He lives in Alabama.

Lara Love Hardin is the COO and Editorial Director of Idea Architects, a creative book and media agency creating a wiser, healthier, more just world. She has an MFA in creative writing from UC Irvine and has collaborated on more than ten books, including the New York Times bestsellers The Sun Does Shine and Designing Your Life. She lives in Santa Cruz, California with her husband, two dogs, and six children.

Olugbemisola Rhuday-Perkovich is the author of 8th Grade Superzero, a Notable Book for A Global Society and Notable Social Studies Trade Book for Young People. She is the co-author of the NAACP Image Award nominated Two Naomis, a Junior Library Guild selection, and its sequel, Naomis Too. She is the editor of The Hero Next Door, a 2019 anthology from We Need Diverse Books.

She lives with her family in NYC, where she writes, makes things, and needs to get more sleep.

"Though profoundly tragic, Hinton’s story is ultimately one of hope and an undeniable call for change."
-Booklist, starred review

"This is a must-have for any collection, and a necessary read to inspire the next generation to fight for social and racial justice."
-School Library Journal, starred review