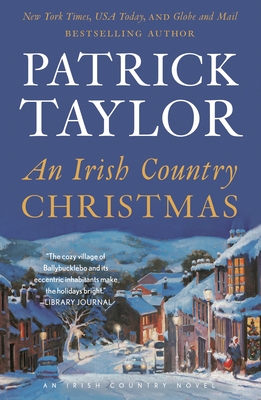 This is book number 3 in the Irish Country Books series.

“Returning to Ballybucklebo, with its doctors and local life, is like slipping into your most comfy slippers and favorite robe. An Irish Country Christmas is winter reading at its most cozy and comforting.”
— Becky Milner, Vintage Books, Vancouver, WA

Just in time for the holidays, An Irish Country Christmas from beloved author Patrick Taylor presents a new look for the beloved New York Times, USA Today, and Globe and Mail bestselling series!

Barry Laverty, M.B., is looking forward to his first Christmas in the cozy village of Ballybucklebo, at least until he learns that his sweetheart might not be coming home for the holidays. But he has little time to dwell on his own romantic disappointment. Christmas may be drawing nigh, but there is little peace to be found on earth, especially for a young doctor plying his trade in the emerald hills and glens of rural Ireland. Along with his senior partner, Dr. Fingal Flahertie O'Reilly, Barry has his hands full dealing with the usual coughs and colds as well as the occasional medical emergency.

To add to the doctors' worries, competition arrives in the form of a new physician whose quackery threatens the well-being of the good people of Ballybucklebo. Can one territory support three hungry doctors? Barry has his doubts. . . .

But the wintry days and nights are not without a few tidings of comfort and joy. Despite their hectic practice, the two doctors still find time to play Santa Claus to a struggling single mother with a sick child at home and not enough money in the bank. Snow is rare in Ulster, and so are miracles, but that doesn't mean they never happen. . . .