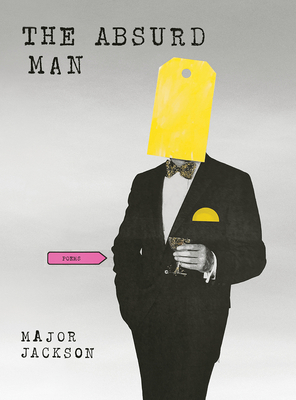 In this knock-out collection, Major Jackson savors the complexity between perception and reality, the body and desire, accountability and judgment.

Inspired by Albert Camus’s seminal Myth of Sisyphus, Major Jackson’s fifth volume subtly configures the poet as “absurd hero” and plunges headfirst into a search for stable ground in an unstable world. We follow Jackson’s restless, vulnerable speaker as he ponders creation in the face of meaninglessness, chronicles an increasingly technological world and the difficulty of social and political unity, probes a failed marriage, and grieves his lost mother with a stunning, lucid lyricism.

The arc of a man emerges; he bravely confronts his past, including his betrayals and his mistakes, and questions who he is as a father, as a husband, as a son, and as a poet. With intense musicality and verve, The Absurd Man also faces outward, finding refuge in intellectual and sensuous passions. At once melancholic and jubilant, Jackson considers the journey of humanity, with all its foibles, as a sacred pattern of discovery reconciled by art and the imagination.

Major Jackson is the author of five volumes of poems, including Roll Deep and Leaving Saturn, which won the Cave Canem Poetry Prize for a first book of poems. The poetry editor of the Harvard Review, Jackson lives in South Burlington, Vermont.

Erudite...Moments of startling linguistic play interrupt Jackson's elegant semiformal style... [The Absurd Man] bring[s] us back to an existential truth that only poetry's fierce tenderness can offer.

Poems in Major Jackson’s The Absurd Man are fashioned from masks and personae, impersonations and thrown voices. How ironic then that this fifth and most daring book yet sings deeply, solemn and vulnerable, a blues for our times. One of the root meanings of the word absurd is ‘out of tune.’ To be out of tune with these years of American absurdity, Jackson’s adroit lyrics resonate through a kind of fission, the collision of selves and personal histories yielding a most genuine ore. These poems face the music of their own making.

At the end of his richly introspective and engagingly vulnerable collection, The Absurd Man, Major Jackson, referring to his double self, also a character in the collection, observes wryly, ‘Tragically, he believes he can mend his wounds with his poetry.’ And in this everything hopeful, elegant, daring, and unsettlingly absurd about The Absurd Man is spoken. Jackson embraces the existential absurdity of this ‘tragedy’ and yet, in doing so, he gives us poems that dare to challenge hopelessness with language.

Jackson's eye is laser-sharp and wry...Throughout the book, [his] weaving of mythology and literary references serve as context for confrontations with personal ghosts.
— Publishers Weekly (starred review)