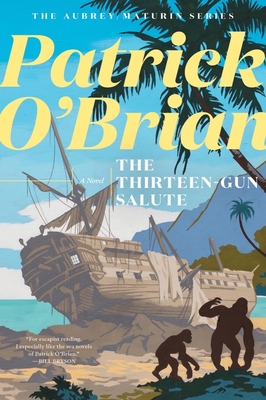 This is book number 13 in the Aubrey/Maturin Novels series.

Captain Jack Aubrey sets sail for the South China Sea with a new lease on life as a privateer. Now he is to shepherd Stephen Maturin—his friend, ship’s surgeon, and sometimes intelligence agent—on a diplomatic mission to prevent links between Bonaparte and the Malay princes that would put English merchant shipping at risk. Along their journey, Maturin climbs the Thousand Steps of the sacred crater of the orangutans; a killer typhoon catches Aubrey and his crew trying to work the Diane off a reef; and, in the barbaric court of Pulo Prabang, a classic duel of intelligence agents unfolds: the French envoys, well entrenched in the Sultan’s good graces, against the savage cunning of Stephen Maturin.

For escapist reading, I especially like the sea novels of Patrick O’Brian.
— Bill Bryson

In length the series is unique; in quality—and there is not a weak link in the chain—it cannot but be ranked with the best of twentieth century historical novels.
— Independent