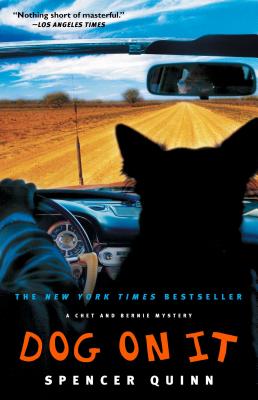 This is book number 1 in the The Chet and Bernie Mystery Series series.

“Dog on It is the debut of a new, hilarious, hard-hitting crime-fighting duo -- Bernie (a human private investigator) and Chet (an almost completely trained police dog). It's Chet who narrates the story, full of interesting clues and the charm of a storytelling style that can't be beat.”
— Jackie Blem, Tattered Cover Bookstore, Denver, CO

The first book of the New York Times bestselling Chet and Bernie mystery series, an “enchanting one-of-a-kind novel” (Stephen King) that is “nothing short of masterful” (Los Angeles Times).

Chet, the wise and lovable canine narrator of Dog on It, and Bernie, a down-on-his-luck private investigator, are quick to take a new case involving a frantic mother searching for her teenage daughter. This well-behaved and gifted student may or may not have been kidnapped, but she has definitely gotten mixed up with some very unsavory characters. With Chet’s highly trained nose leading the way, their hunt for clues takes them into the desert to biker bars and other exotic locales—until the bad guys try to turn the tables and the resourceful duo lands in the paws of peril. Spencer Quinn’s irresistible mystery kicks off a delightful new series that will have readers panting for more.

Spencer Quinn is the bestselling author of eight Chet and Bernie mystery series, as well as the #1 New York Times bestselling Bowser and Birdie series for middle-grade readers. He lives on Cape Cod with his wife Diana—and dogs Audrey and Pearl. Keep up with him by visiting SpenceQuinn.com.

"Nothing short of masterful.... Sequels are a given, and a must. " -- Los Angeles Times

"A winning debut...that fans of classic mysteries are sure to appreciate." -- Publishers Weekly (starred review)

"[Dog On It] will delight dog-loving mystery readers, but the book is also an excellent PI tale, dogs aside....A great sleuth and always upbeat, Chet may well be one of the most appealing new detectives on the block, but Bernie us a close runner-up. Excellent and fully fleshed primary and secondary characters, a consistently doggy view of the world, and a sprightly pace make this a not-to-be-missed debut. Essential for all mystery collections and for dog lovers everywhere." -- Booklist (starred review)

"At last, a dog lover's mystery that portrays dogs as they really are....Quinn's characters are endearing, and his narrative is intriguing, fast-moving, and well written. Even cat lovers will find it entertaining. [Dog On It] is highly recommend." -- Library Journal (starred review)

"[Dog On It] features the most winning narrator I've come across in a long time...[and] manages to ratchet up some real suspense." -- Christian Science Monitor