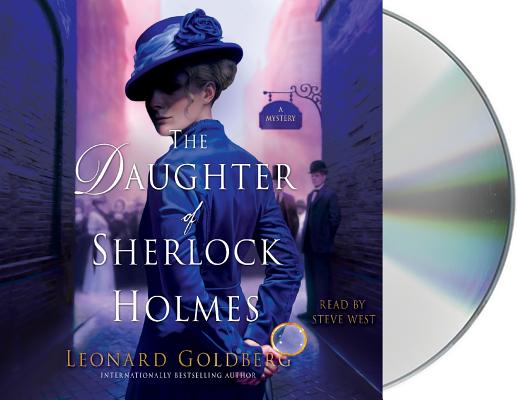 By Leonard Goldberg, Steve West (Read by)
$44.99
OUT OF PRINT: Email or call for price

This is book number 1 in the The Daughter of Sherlock Holmes Mysteries series.

From USA Today and internationally bestselling author Leonard Goldberg comes The Daughter of Sherlock Holmes, a new thrilling tale of the great detective’s daughter and her companion Dr. John Watson, Jr. as they investigate a murder at the highest levels of British society.

1914. Joanna Blalock’s keen mind and incredible insight lead her to become a highly-skilled nurse, one of the few professions that allow her to use her finely-tuned brain. But when she and her ten-year-old son witness a man fall to his death, apparently by suicide, they are visited by the elderly Dr. John Watson and his charming, handsome son, Dr. John Watson Jr. Impressed by her forensic skills, they invite her to become the third member of their investigative team.

Caught up in a Holmesian mystery that spans from hidden treasure to the Second Afghan War of 1878-1880, Joanna and her companions must devise an ingenious plan to catch a murderer in the act while dodging familiar culprits, Scotland Yard, and members of the British aristocracy. Unbeknownst to her, Joanna harbors a mystery of her own. The product of a one-time assignation between the now dead Sherlock Holmes and Irene Adler, the only woman to ever outwit the famous detective, Joanna has unwittingly inherited her parents’ deductive genius.

Leonard Goldberg is the USA Today bestselling author of the Joanna Blalock medical thrillers. His novels have been translated into a dozen languages and were selections of the Book of the Month Club, French and Czech book clubs, and The Mystery Guild. They were featured as People’s “Page-Turner of the Week” and at the International Book Fair. After a long career affiliated with the UCLA Medical Center as a Clinical Professor of Medicine, he now lives on an island off the coast of Charleston, SC.

"Steve West transports listeners to London at the turn of the twentieth century with his animated narration of Leonard Goldberg's homage to Arthur Conan Doyle. ...the audiobook is sure to engage mystery fans." -AudioFile

"Cleverly crafted with fascinating characters and a plot that Conan Doyle would be proud of. Sherlock fans looking for a new series need look no further than Goldberg's well developed and fascinating tale!" —New York Times bestselling author M.J. Rose on The Daughter of Sherlock Holmes

“Strap on your seat belts for a thrilling ride. Leonard Goldberg pulls out all the stops in this action-packed tale that’s sure to keep you flipping the pages.” —Tess Gerritsen, New York Times bestselling author

“All the excitement, intrigue and danger you could ask for.” —Kirkus Reviews on Patient One