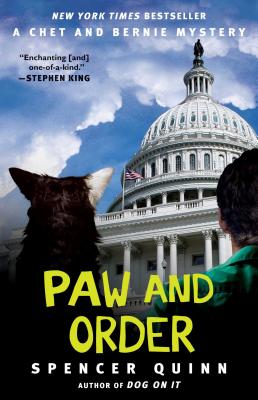 This is book number 7 in the The Chet and Bernie Mystery Series series.

In the seventh installment in the brilliant New York Times bestselling mystery series, canine narrator Chet and PI Bernie Little journey to Washington, DC, and the dog-eat-dog world of our nation’s capital.

Chet and Bernie pay a visit to Bernie’s girlfriend, Suzie Sanchez, an ace reporter living in far-off Washington, DC. She’s working on a big story she can’t talk about, but when her source, a mysterious Brit with possible intelligence connections, runs into trouble of the worst kind, Bernie suddenly finds himself under arrest.

Meanwhile Chet gets to know a powerful DC operative who may or may not have the goods on an ambitious politician. Soon Chet and Bernie are sucked into an international conspiracy, battling unfamiliar forces under the blinking red eyes of a strange bird that Chet notices from the get-go but seems to have slipped by everybody else. Most menacing of all is Barnum, a guinea pig with the fate of the nation in his tiny paws.

As Harry Truman famously quipped, “If you want a friend in Washington, get a dog.” Too bad he didn’t get to meet Chet!

Spencer Quinn is the bestselling author of eight Chet and Bernie mystery series, as well as the #1 New York Times bestselling Bowser and Birdie series for middle-grade readers. He lives on Cape Cod with his wife Diana—and dogs Audrey and Pearl. Keep up with him by visiting SpenceQuinn.com.

Praise for Paw and Order:

“A doggone clever detective duo… always a hoot. This onesalts a doggedly determined investigation with plenty of laughs”.
— Kirkus Reviews

“Both smart and funny.”
— Booklist

Praise for The Sound and the Furry

“Spencer Quinn’s masterful job of having a canine narrator isn’t cutesy, nor does it grow tiresome, a tribute to his wordsmithing.”
— New York Journal of Books

“If you are a dog lover, you will instantly recognize your own pet in Chet’s wry commentary on the world as he sees it. Quinn’s masterly skills at suspense writing provide a heart-racing climax.”
— Book Reporter

"Even cat lovers will howl with delight."
— USA Today

"Pulls the reader along as if on a leash."