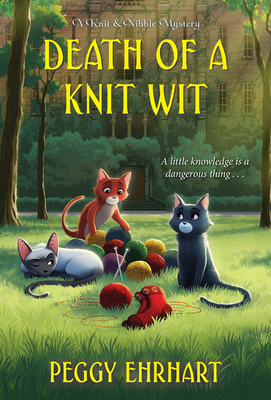 This is book number 8 in the A Knit & Nibble Mystery series.

With the help of her friends in the Knit and Nibble Club, crafting magazine editor, widower, and amateur sleuth Pamela Paterson must solve the murder of an adulterous professor during a weekend-long knitting bee and fiber arts conference in the eighth Knit & Nibble Mystery from cozy author Peggy Ehrhart.


When a professor is poisoned, Pamela Paterson and the members of the Knit and Nibble knitting club must take a crash course in solving his mysterious murder.

Pamela has organized a weekend-long knitting bee as part of a conference on fiber arts and crafts at Wendelstaff College. But when pompous Professor Robert Greer-Gordon Critter, the keynote speaker at the conference, crashes the bee, he seems more interested in flirting than knitting. The man’s reputation as a philanderer supersedes his academic reputation. After coffee and cookies are served, the professor suddenly collapses, seemingly poisoned—but how? Everyone had the coffee and cookies. Joined by her bestie Bettina and the Knit and Nibble ladies, Pamela sorts through everything from red socks to red herrings to unravel the means and motives of a killer dead set on teaching the professor a lesson…

Peggy Ehrhart is a former English professor who lives in Leonia, New Jersey, where she writes mysteries and plays blues guitar. She holds a Ph.D. in medieval literature from the University of Illinois and taught writing and literature at Queens College, CUNY, and Fairleigh Dickinson University, where she was a tenured full professor. Her short stories have appeared in Futures Mystery Anthology Magazine, Crime and Suspense, Flashing in the Gutters, Spinetingler, Crime Scene: New Jersey 2, and Murder New York Style. A longtime member of Mystery Writers of America and Sisters in Crime, Peggy served on the board of MWA New York as head of the Mentor Committee. She was president of Sisters in Crime NY/TriState from 2013 to 2015. Peggy regularly attends mystery-writing conferences and participates in conference panels and also gives talks on mystery fiction at libraries in New York, Connecticut, and New Jersey.