On Her Wings: The Story of Toni Morrison (Hardcover) 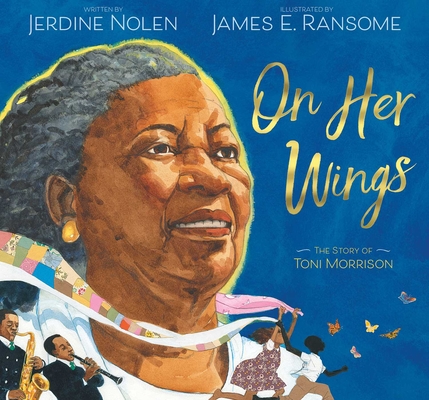 Born Chloe Ardelia Wofford in Ohio, Toni Morrison grew up listening to her family tell myths, legends, and stories from the Bible. She loved hearing the music and power of the words. Toni also heard new stories from the students from other countries who went to her school. After an early childhood of soaking up tales from those around her, it was no surprise Toni grew into a voracious reader.

She worked at her town library as a teenager and was an editor for a New York publisher as an adult. When it came time for her to write her own stories, she knew she wanted to write about her people—Black people. Early in the morning and late at night after her children were asleep, Toni began work on what would become an acclaimed and trailblazing body of work.

This luminous picture book has back matter with further reading on Toni Morrison’s life and work.

Jerdine Nolen is the beloved author of many award-winning books, including Big Jabe; Thunder Rose, a Coretta Scott King Illustrator Honor Book; and Hewitt Anderson’s Great Big Life, a Bank Street Best Book of the Year, all illustrated by Kadir Nelson. She is also the author of Eliza’s Freedom Road, illustrated by Shadra Strickland, which was an ALA/YALSA Best Fiction Nominee for Young Adults; Raising Dragons, illustrated by Elise Primavera, which received the Christopher Award; and Harvey Potter’s Balloon Farm, illustrated by Mark Buehner, which was made into a movie by the same name. Her other books include Calico Girl, a Kirkus Reviews Best Book of the Year, and Irene’s Wish, illustrated by A.G. Ford, which Kirkus Reviews called “delightful and memorable” in a starred review. Ms. Nolen is an educator and lives in Ellicott City, Maryland.

James E. Ransome’s highly acclaimed illustrations for Before She Was Harriet received the 2018 Coretta Scott King Illustrator Honor. His other award-winning titles include the Coretta Scott King winner The Creation; Coretta Scott King Honor Book Uncle Jed’s Barbershop; Sweet Clara and the Freedom Quilt; and Let My People Go, winner of the NAACP Image Award. James is also a recipient of the ALA Children’s Literature Legacy Award. He frequently collaborates with his wife, author Lesa Cline-Ransome. One of their recent titles is Game Changers: The Story of Venus and Serena Williams, which received four starred reviews and was an ALA Notable Children’s Book. James is a professor and coordinator of the MFA Illustration Graduate Program at Syracuse University. He lives in New York’s Hudson River Valley region with his family. Visit James at JamesRansome.com.