The Language Game: How Improvisation Created Language and Changed the World (Hardcover) 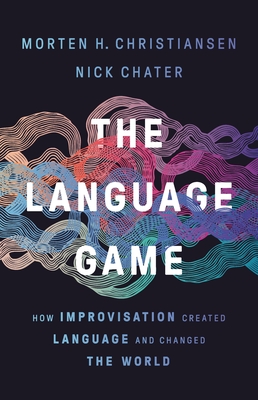 Language is perhaps humanity’s most astonishing capacity—and one that remains poorly understood. In The Language Game, cognitive scientists Morten H. Christiansen and Nick Chater show us where generations of scientists seeking the rules of language got it wrong. Language isn’t about hardwired grammars but about near-total freedom, something like a game of charades, with the only requirement being a desire to understand and be understood. From this new vantage point, Christiansen and Chater find compelling solutions to major mysteries like the origins of languages and how language learning is possible, and to long-running debates such as whether having two words for “blue” changes what we see. In the end, they show that the only real constraint on communication is our imagination.

Morten H. Christiansen is the William R. Kenan, Jr. professor of psychology at Cornell University as well as a senior scientist at the Haskins Labs and professor in cognitive science of language at the School of Communication and Culture, Aarhus University, Denmark. He is the author of more than 200 scientific papers and has edited four books. He lives near Ithaca, New York.

Nick Chater is a cognitive psychologist who is a professor of behavioral science at Warwick University and has held chairs in psychology at Warwick and at University College London. He has written over 250 publications, has won four national awards for psychological research, and has served as associate editor for the journals Cognitive Science, Psychological Review, and Psychological Science. His previous trade book, The Mind is Flat, won the Association of American Publishers PROSE Award for Best Book in Clinical Psychology, 2018. He lives near Warwick, United Kingdom.

“Eminently readable…The Language Game is itself a beautiful bunch of words and phrases.”
—Forbes

“Language was the Promethean fire that ignited the human explosion. Its origin is one of the three great mysteries that still tantalise evolutionary biologists. Christiansen and Chater give a marvellously clear explanation of the problem and a generously fair treatment of rival theories, followed by a lively, even playfully persuasive advocacy of their own solution.”—Richard Dawkins, author of The Selfish Gene

"This book turned everything I thought I knew about language upside down. It's persuasive, full of fascinating details, and an absolute delight to read." —Tim Harford, author of How To Make the World Add Up

"The Language Game is a highly original, convincing story of how humans developed their greatest invention, language. It builds on years of impressive research by Morten Christiansen and Nick Chater and shows language science at its very best. A delight to read, it deserves careful study by anyone interested in the nature, function, and origins of human communication."
—Daniel Everett, author of Don’t Sleep, There Are Snakes

"A joyful romp across species and cultures through the ways language is invented and reinvented, peppered with insightful stories you will feel compelled to tell anyone in earshot." —Barbara Tversky, author of Mind in Motion