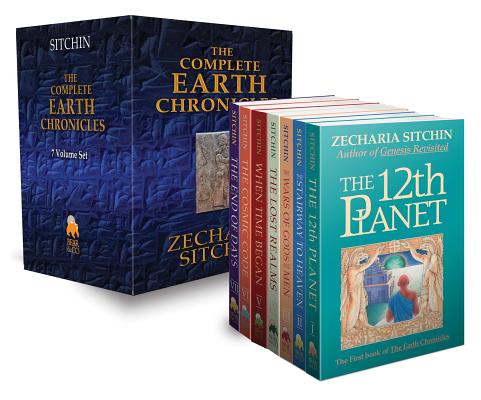 • Includes The 12th Planet, The Stairway to Heaven, The Wars of Gods and Men, The Lost Realms, When Time Began, The Cosmic Code, and The End of Days

The Earth Chronicles series, with millions of copies sold worldwide, represents the culmination of Zecharia Sitchin’s 30 years of intensive research into the history and prehistory of Earth and humankind as recorded by the ancient civilizations of the Near East. Within these volumes, Sitchin--one of the few scholars able to read and interpret ancient Sumerian and Akkadian clay tablets--presents indisputable millennia-old proof of humanity’s extraterrestrial forefathers, the Anunnaki, who visited Earth every 3,600 years from their home planet Nibiru.

This boxed set of hardcover collector’s editions with enhanced maps and diagrams includes all 7 volumes of the Earth Chronicles series: The 12th Planet, The Stairway to Heaven, The Wars of Gods and Men, The Lost Realms, When Time Began, The Cosmic Code, and The End of Days.

Zecharia Sitchin (1920-2010), an eminent Orientalist and biblical scholar, was born in Russia and grew up in Palestine, where he acquired a profound knowledge of modern and ancient Hebrew, other Semitic and European languages, the Old Testament, and the history and archaeology of the Near East. A graduate of the University of London with a degree in economic history, he worked as a journalist and editor in Israel for many years prior to undertaking his life’s work--The Earth Chronicles.

One of the few scholars able to read the clay tablets and interpret ancient Sumerian and Akkadian, Sitchin based The Earth Chronicles series on the texts and pictorial evidence recorded by the ancient civilizations of the Near East. His books have been widely translated, reprinted in paperback editions, converted to Braille for the blind, and featured on radio and television programs.

“For thousands of years priests, poets, and scientists have tried to explain how man was created. Now a recognized scholar has come forth with a theory that is most astonishing of all.”
— United Press International

“Sitchin is a zealous investigator into man’s origins . . . a dazzling performance.”
— Kirkus Reviews

“. . . the most important books on Earth’s roots ever written.”
— East West Journal

“Anyone whose Sitchin paperbacks are suffering the ravages of the years will appreciate this new collector's edition, as will those who've only read Sitchin's most recent works.”
— Ruth Parnell, Nexus Magazine, October 2014