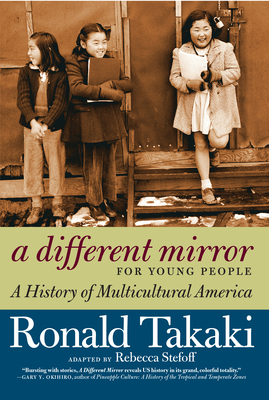 A longtime professor of Ethnic Studies at the University of California at Berkeley, Ronald Takaki was recognized as one of the foremost scholars of American ethnic history and diversity. When the first edition of A Different Mirror was published in 1993, Publishers Weekly called it "a brilliant revisionist history of America that is likely to become a classic of multicultural studies" and named it one of the ten best books of the year. Now Rebecca Stefoff, who adapted Howard Zinn's best-selling A People's History of the United States for younger readers, turns the updated 2008 edition of Takaki's multicultural masterwork into A Different Mirror for Young People.

Drawing on Takaki's vast array of primary sources, and staying true to his own words whenever possible, A Different Mirror for Young People brings ethnic history alive through the words of people, including teenagers, who recorded their experiences in letters, diaries, and poems. Like Zinn's A People's History, Takaki's A Different Mirror offers a rich and rewarding "people's view" perspective on the American story.

RONALD TAKAKI (1939-2009) was recognized as one of the foremost scholars of American ethnic history and diversity. He is the author of the multiple award-winning books Strangers from a Distant Shore: A History of Asian Americans and A Different Mirror: A History of Multicultural America.

REBECCA STEFOFF specializes in writing nonfiction for young readers, with a focus on scientific, historical, and literary subjects. She previously explored the subject of evolution in Charles Darwin and the Evolution Revolution(Oxford University Press, 1996) and the four-volume series Humans: An Evolutionary History (Marshall Cavendish Benchmark, 2010). Stefoff has also written on exploration, forensic investigation, and archaeology, among other topics. In addition to writing her own books, Stefoff has adapted several important nonfiction works for young audiences: A Young People's History of the United States, based on Howard Zinn's bestselling classic of progressive history; Before Columbus: The Americas in 1491, based on Charles C. Mann's ground-breaking new look at the archaeology of the pre-Columbian Americas; and A Different Mirror for Young People, based on a major work of scholarship by ethnic historian Ronald Takaki.

“[A Different Mirror is] a splendid achievement, a bold and refreshing new approach to our national history. The research is meticulous, the writing powerful and eloquent, with what can only be called an epic sweep across time and cultures.” —Howard Zinn

“This 375-page book would be an excellent way to include multi-ethnic materials in the classroom as a way to ensure that your students see their unique identities reflected in their coursework.” —Skipping Stones

"The 'mirror' that Ronald Takaki holds up to the United States reflects a multicultural history of oppression and exploitation, but also struggle, solidarity, and community. In the most profound sense, this is a people's history of our country. Takaki shows what has torn us apart, yet what knits us together. This young people's version of A Different Mirror will introduce a new generation to Takaki's pathbreaking scholarship." —Bill Bigelow, curriculum editor, Rethinking Schools, and co-director, Zinn Education Project