Playing Under the Piano: From Downton to Darkest Peru (Hardcover) 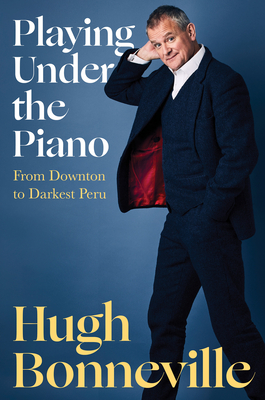 A moving, laugh-out-loud memoir from one of today’s best-loved British actors, whose credits include Downton Abbey, Notting Hill, and Paddington.

From getting his big break as Third Shepherd in the school nativity play, to mistaking a Hollywood star for a real estate agent, Hugh Bonneville creates a brilliantly vivid picture of a career on stage and screen. What is it like working with Judi Dench and Julia Roberts, or playing Robert De Niro’s right leg, or not being Gary Oldman, twice? A wickedly funny storyteller, Bonneville also writes with poignancy about his father’s dementia and of his mother, whose life in the secret service emerged only after her death.
Whether telling stories of working with divas, Dames, or a bear with a penchant for marmalade, this account of his life as an actor is richly entertaining.

Hugh Bonneville was a member of the National Youth Theatre of Great Britain and made his professional acting debut at the Open Air Theatre, Regent’s Park, in 1986. He joined the Royal National Theatre in 1987 and the Royal Shakespeare Company in 1991, where his roles included Laertes, opposite Kenneth Branagh’s Hamlet. He is perhaps best known for playing Mr Brown in the Paddington movies and Robert Crawley in the ITV/PBS series Downton Abbey. Over its six seasons and two movies, Downton Abbey won dozens of awards worldwide, Bonneville receiving a Golden Globe nomination and two Emmy nominations for his performance. He lives in West Sussex, England, with his wife, Lulu Williams, and their son, Felix.

“Great fun…delicious and endearing.” —The Guardian

“What a storyteller that Earl of Grantham is!” —People

“A riveting account of what it takes to be an actor…I don’t remember when I last read a book that gave me so many laughs.” —Sunday Times

“Warm, funny, leisurely paced, and generously stocked with the lore of the author’s profession…bringing less well-known players affectionately and vividly to life…Readers will be entertained and come away with a watch list.” —Kirkus Reviews

“Intriguing, breezy, and full of intellect and humor…a must-read.” —BookPage

“Really enjoyed this. Wonderfully funny and utterly charming—just like the man himself!” —Jack Whitehall, actor and comedian

“By turns funny, touching, revealing—full of insights, delights, and surprises. I couldn’t have enjoyed it more.” —Gyles Brandreth, author of Philip: The Final Portrait