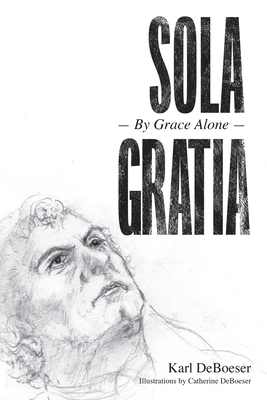 Sola Gratia (By Grace Alone) is a two-tiered story presented within the context of two snapshots in time-today and some five hundred years ago. What did people in earlier times, especially the venerable Martin Luther, think about the law and about religious rules and regulations? What did they understand about the concept of grace? And how does all that stack up in comparison to our lives today? There has been considerable change in five hundred years, and yet much remains the same.

In the story, a serious question is raised: How can one get past the regret, pain, and heartbreak of having done something terribly wrong? Furthermore, if one has done 999 good things in life and one bad thing, is there redemption? Does that one bad thing cancel out every good thing? Likewise, if one has done 999 bad things in life and one good one, is restoration and forgiveness possible? Apparently, everyone is flawed. Even those with the best of intentions. And there might even be a morsel of good in those with the worst of intentions. Seems that to different degrees, we are all at the same time good and bad.

The book is the basis of a larger project, a musical play which adds an expansive dimension to the compelling story. The author's original intent was to write a biographical play about Martin Luther, the spark of the Protestant Reformation movement in the sixteenth century, and set it to music. But he chose a different structural tack to make the story more impactful to contemporary readers/audiences, i.e., to illustrate parallels between medieval times and today, and to show that we can draw inspiration and enlightenment from the lives of historical figures-such as Martin and Katie Luther, Jan Hus, Saint Paul, John Newton, King David, Jesus, etc. The present-day story depicts everyday people struggling with matters of vocational fulfillment, family relationships, faith, morality, and heartbreaking tragedy. Inserted in the narrative are historical events and writings of Martin Luther and others in juxtaposition. In unsettled times long ago, it took a bullheaded, brash, and outspoken monk to inspire people, to give them a sense of individual power and hope. Luther

is referenced early in the story, and, ultimately, he makes inexplicable appearances, interacting with, conversing with, and even influencing characters. A central component of the story is the scourge

of drug addiction-the Black Plague of our time.

Sola Gratia is very real in its heartrending depictions, and it shows that healing and redemption are there for the claiming by anyone who is seeking.