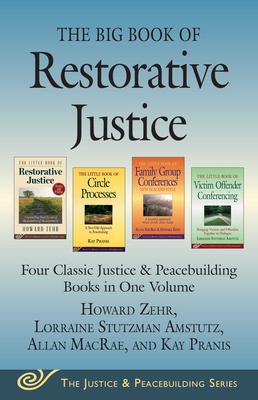 Restorative justice, with its emphasis on identifying the justice needs of everyone involved in a crime, is a worldwide movement of growing influence that is helping victims and communities heal while holding criminals accountable for their actions. This is not a soft-on-crime, feel-good philosophy, but rather a concrete effort to bring justice and healing to everyone involved in a crime. Circle processes draw from the Native American tradition of gathering in a circle to solve problems as a community. Peacemaking circles are used in neighborhoods, in schools, in the workplace, and in social services to support victims of all kinds, resolve behavior problems, and create positive climates.

Each book is written by a scholar at the forefront of these movements, making this important reading for classrooms, community leaders, and anyone involved with conflict resolution.

Howard Zehr directed the first victim offender conferencing program in the US and is one of the original developers of restorative justice as a concept. Zehr is the Distinguished Professor of Restorative Justice and the codirector of the Zehr Institute for Restorative Justice at Eastern Mennonite University. He lives in Harrisonburg, Virginia.

Allan MacRae is the manager of coordinators for the southern region of New Zealand, overseeing Family Group Conferences for both youth justice and care and protection. After receiving the National Supreme Award for Innovation, Allan developed a program in Wellington, which emerged as a leading model of youth justice. He lives in New Zealand.

Kay Pranis served as the restorative justice planner for the Minnesota Department of Corrections for nine years. Pranis has conducted circle trainings in a diverse range of communities—from schools to prisons to workplaces to churches, and from rural towns in Minnesota to Chicago’s South Side to Montgomery, Alabama. She lives in St. Paul, Minnesota.

Lorraine Stutzman Amstutz is the director of the Mennonite Central Committee’s (MCC) office on crime and justice. Lorraine has worked in the victim offender field since 1984 when she began working in Elkhart, Indiana, the site of the first Victim Offender Reconciliation Program (VORP) in the United States. Lorraine currently serves on the board of the local victim offender program in Lancaster County, Pennsylvania, where she lives.