Seduced by Story: The Use and Abuse of Narrative (Paperback) 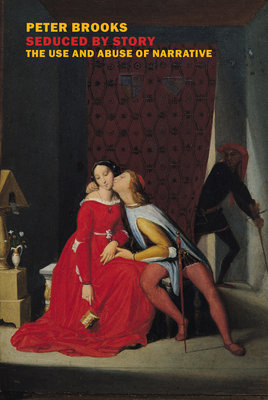 In this spiritual sequel to his influential Reading for the Plot, Peter Brooks examines the dangerously alluring power of storytelling.

“There’s nothing in the world more powerful than a good story. Nothing can stop it. Nothing can defeat it.” So begins the scholar and literary critic Peter Brooks’s reckoning with today’s flourishing cult of story.

Forty years after publishing his seminal work Reading for the Plot, his important contribution to what came to be known as the “narrative turn” in contemporary criticism and philosophy, Brooks returns to question the unquestioning fashion in which story is now embraced as an excuse or explanation and the fact that every brand or politician comes equipped with one.

In a discussion that ranges from The Girl on the Train to legal argument, Brooks reminds us that among the powers of narrative is the power to deceive.

Peter Brooks is the author of several books, including the nonfiction volumes The Melodramatic Imagination, Reading for the Plot, Psychoanalysis and Storytelling, Troubling Confessions, Realist Vision, Henry James Goes to Paris, and Flaubert in the Ruins of Paris, as well as two novels, World Elsewhere and The Emperor’s Body. He published Balzac’s Lives with New York Review Books in 2020, and has edited two NYRB Classics, Balzac’s The Human Comedy: Selected Stories and Vivant Denon’s No Tomorrow. He is Sterling Professor Emeritus of Comparative Literature at Yale.

"A potent defense of attentive reading and its real-world applications.” —Jennifer Szalai, The New York Times

“A succinct account of narrative persuasion, offering a solid case for the ambivalent power that stories can have in shaping us as individuals and nations.” —Caterina Domeneghini, Los Angeles Review of Books

"Society’s obsession with résumé, and its use to construct an aura of credibility, is such a pervasive element of contemporary life that it inevitably implicates even the author and his own field of 'literary humanities.' But that dynamic is exactly what Brooks parses in his terrific critical survey: the essential differences between surface stories and the ways in which they’re constructed." —J. Howard Rosier, Vulture

"A bracing and insightful look at the downsides of reducing everything to storytelling. . . A thoughtful and revelatory analysis of what’s lost when story trumps all." —Publishers Weekly

"For writers, readers, and citizens of the story-addled world." —Emily Temple, Lit Hub

“A rhapsody to the partial suspension of disbelief that allows us to immerse ourselves in novels, but simultaneously and most crucially, a brilliant intervention against the complete suspension of disbelief that allows a citizenry to succumb to conspiracy theories, false-flag narratives, authoritarian fictions. An eloquent and triumphant culmination of Peter Brooks’s lifelong inquiry into the aesthetic and ethical intersection of literature, psychoanalysis, law, and politics. Impossibly good.” —David Shields

“Stories are everywhere—shaping us, shocking us, showing us what really happened (or making it up). Peter Brooks invites us to step to one side of our over-storied surroundings to think about all the ways they work. . . . In the process, he tells a gripping tale of his own.” —Rachel Bowlby

“This is an amazing book, crossing back and forth between literature and politics, illuminating each side by the other. It is written without fuss, continually evocative and surprising.” —Richard Sennett