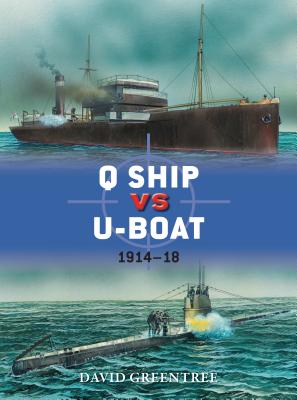 This is book number 57 in the Duel series.

At the start of World War I a new and potent threat to Britain's naval supremacy took shape in the form of the Kaiser's Imperial German submarines, thanks to their recently acquired ability to submerge and stalk their adversaries. A submarine's crew could not board and capture a merchant ship, however, and at first the German leadership was reluctant to order their U-boat captains to use gunfire or torpedoes to sink merchantmen - crewed by civilian seamen - because of the expected hostile reaction of neutral countries such as the United States. Instead, U-boat captains were ordered to surface, then check the manifest of merchantmen and allow their crews to take to lifeboats before sinking the cargo vessels, rendering the U-boat highly vulnerable to attack. This enabled the Royal Navy to counter the submarine threat with vessels whose outward appearance was that of a merchantman, but which kept hidden an arsenal of weapons that would spring to life if a U-boat surfaced - the Q-ships.

Q-ships came in all shapes and sizes - coastal steamer, trawler, barque, yacht or schooner - but all had to look harmless in order to lure opponents to the surface and encourage them to attack. Armaments differed according to ship size; steamers commonly had 4in guns mounted amidships and in the bow, trawlers 3-pdrs and sailing ships 12-pdrs. Those who served on Q-ships had to accept that their U-boat opponents would be able to strike first. Q-ship captains kept ready a 'panic crew', which was trained to act out an elaborate evacuation to convince the U-boat commander that the ship was being abandoned by its crew. The Q-ship captain would remain behind with a handful of other crewmen manning the guns, which remained hidden until the most opportune time to unmask and engage the U-boat.

These deceptions did not go unnoticed, however; German captains learnt to be cautious, and frequently would engage with their guns at longer range and later in the war with torpedoes. U-boat boatswain's mate Christof Lassen view of Q-ships as the 'most unpleasant object we could hope to meet' was commonly held. As the Allies condemned the sinking of merchantmen, the Germans vilified Q-ships as a crude deceit manned by pirates and contrary to the rules of civilized warfare. Encounters were often fought with bitterness and little quarter was given.

The Q-ship suited the Royal Navy's preference for offensive action to counter the submarine. The Q-ship concept had emerged early in the war when no other method seemed likely to counter the U-boat threat, and flourished until new technologies and tactics were developed, tested and implemented. Q ships instilled wariness into a previously bold and seemingly invincible enemy. The usefulness of Q-ships waned as they lost their surprise factor, but they helped mitigate the U-boat menace until more effective and efficient means of defence were adopted. Featuring specially commissioned full-colour artwork and drawing upon the latest research, this engaging study brings to life the deadly duel between these two very different vessels at the height of World War I.

David Greentree graduated from the University of York with a BA in History before completing an MA in War Studies at King's College London and qualifying as a lecturer in Further Education. In 1995 he accepted a commission in the Royal Air Force and has served in a variety of locations, including Afghanistan and Oman. He has written several books for Osprey, focusing on British military history and World War II.

Peter Dennis was inspired by contemporary magazines such as Look and Learn, leading him to study Illustration at Liverpool Art College. Peter has since contributed to hundreds of books, predominantly on historical subjects, including many Osprey titles. A keen wargamer and modelmaker, he is based in Nottinghamshire, UK.

Ian Palmer is a highly experienced digital artist with two decades of experience in the video games industry, both as a 3D artist and an Art Director. He has a passion for military history, gaming and riding his motorbike. He lives in Warwickshire with his wife, daughter and menagerie of pets.

“This edition by David Greentree covers the development and deployment of q-ships as well as how the tactics changed as the war progressed. It also covers the German side of things and how they reacted to this threat. There are a lot of great period photos and some fine art work and drawings to get an idea of how these ships were designed and used. There are also several superb examples of Q-ship operations and successes. It makes for a most interesting read, a book that no WWI naval fan should be without.” —Scott Van Aken, www.modelingmadness.com