Thus Spake Zarathustra: A Book for All and None (Paperback) 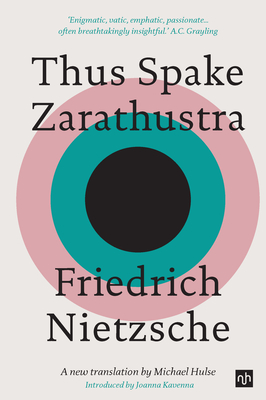 In Thus Spake Zarathustra, Nietzsche’s infamous protagonist sets off on a grand and noble quest to find meaning in a secular world and to live joyfully alongside the knowledge of death.

In this new translation by Michael Hulse—the first in English by a poet—Zarathustra is revealed in all his bold and ironic splendor as a man who prizes self-worth above all else as a moral code to live by.

Radical, uncategorizable, contradictory, and often humorous, Thus Spake Zarathustra is a grand celebration of human existence by one of the most influential thinkers of the past two centuries.

Friedrich Nietzsche (1844–1900) was a German philosopher, essayist, and critic whose writings about morality, truth, language, aesthetics, and nihilism are considered cornerstones of Western philosophy.

Michael Hulse is a poet, translator and critic. He has won numerous awards for his poetry and his 2013 collection, Half Life, was chosen as a Book of the Year in the Australian Book Review. He has translated many works from the German, including titles by Goethe, Rilke, and W. G. Sebald. His translations have been shortlisted for numerous major translation awards, including the PEN Translation Prize, the Aristeion Translation Prize, and the Schlegel-Tieck Prize. He teaches poetry and comparative literature at Warwick University.

Joanna Kavenna is the author of several works of fiction and non-fiction
including The Ice Museum, Inglorious, The Birth of Love and A Field Guide to Reality. Her short stories and essays have appeared in The New Yorker, the London Review of Books, the New Scientist, The Guardian and The New York Times, among other publications. In 2008 she won the Orange Prize for New Writing, and in 2013 she was named as one of Granta’s Best of Young British Novelists.

“Michael Hulse’s translation of this extraordinary work feels absolutely fresh and true. As in his poetry, all the words feel new-minted and authentic, full of energy and understanding. As Zarathustra says, ‘The self is always listening and seeking’: reading this version of his story is like seeing the colours of an Old Master for the first time.” —Ruth Padel, Professor of Poetry, King’s College London

“It is often said that poetry is what is lost in translation. Given that Michael Hulse is both a major poet and one of the great translators of German literature, it is not surprising that he has done full justice to Thus Spake Zarathustra. English-speaking readers are indebted to him for a sparkling, transparent rendering of Nietzsche’s poetic philosophical masterpiece.” —Raymond Tallis

“A crystalline translation of a work that many regard as Nietzsche’s greatest, yet whose elusively extravagant style has often baffled, indeed repelled, Anglophones. The poet Michael Hulse renders the complexity of Nietzsche’s prose-poem—its dramatic claims, its mystical power, and its philosophical richness—in spellbinding language.” —Simon May