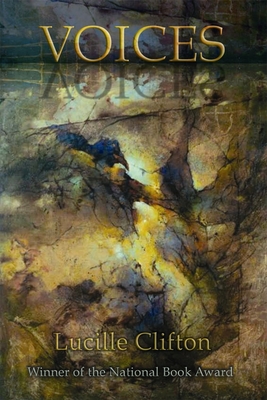 This is book number 112 in the American Poets Continuum series.

In 2007, Lucille Clifton became the first African American woman to win the Ruth Lilly Poetry Prize, one of the most prestigious American poetry awards and one of the largest literary honors for work in the English language. Clifton has also won the National Book Award in poetry for Blessing the Boats (BOA Editions, 2000), and is the only author ever to have two collections, Good Woman: Poems and a Memoir (BOA Editions, 1987) and Next: New Poems (BOA Editions, 1987), named finalists for the Pulitzer Prize in one year.

In Voices, Clifton continues her celebrated aesthetic of writing poems for the disempowered and the underprivileged while finding humor and redemption among life's many hardships. This book also highlights Clifton's ability to write inventive dramatic monologues. Voices includes monologues spoken by animals, as well as by the food product spokespeople Aunt Jemima, Uncle Ben, and the apparently nameless guy on the Cream of Wheat box.

BOA Editions is thrilled to present the newest poetry collection by the one and only Lucille Clifton.

Lucille Clifton (1936-2010) was the 2007 recipient of the Ruth Lilly Poetry Prize, as well as the 2010 Frost Medal from the Poetry Society of America. Her final poetry collection, Voices, was published by BOA in September 2008. She was an award-winning poet, fiction writer, and author of children's books. Her poetry book, Blessing the Boats: New and Selected Poems 1988-2000, won the 2000 National Book Award for Poetry. Two of Clifton's BOA poetry collections, Good Woman: Poems and a Memoir 1969-1980, and, Next: New Poems, were chosen as finalists for the Pulitzer Prize in 1988, the only author ever to have done so, while Clifton's, The Terrible Stories, was a finalist for the 1996 National Book Award. Clifton received fellowships from the National Endowment for the Arts; an Emmy Award from the American Academy of Television Arts and Sciences; the Shelley Memorial Prize; and the Charity Randall Citation. She served as a Distinguished Professor of Humanities at St. Mary's College in Maryland. She was appointed a Fellow of The American Academy of Arts and Sciences, and elected as Chancellor of The Academy of American Poets in 1999.