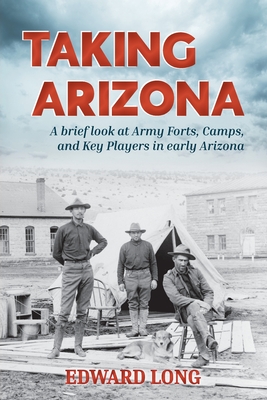 The Arizona Territory was created in 1863 from the Western half of what was known as the New Mexico Territory. Arizona remained a territory until 1912 when it became America's 48th state.

Until the late 1600s, when the Spanish began to arrive, Arizona's Indians had the land all to themselves. This book, Taking Arizona, is a cursory account of what transpired during the transitioning of Arizona to a land where an American citizen could settle and thrive.

When the early Southwest Indians marked their land they included what we know today as Sonora, in Northern Mexico. This resulted in ongoing hostilities between the Indians and the Mexicans. Then, along came forces of the American government seeking new territory.

Many states were settled only after hard-fought battles with indigenous peoples who fought to keep their land, but no territory saw more bloody battles than did Arizona.

This book begins as the stage is set for high drama played out by three players: Indians, the U.S. Army, and American settlers. The fictional accounts found in popular myths, dime novels, and Western movies are not included here. Published first-person accounts of actual events of the day are the sources for this book. This is meant to be a truthful, informative look at Arizona's past. Care has been taken to exclude Hollywood fiction.

There is a detailed bibliography. Frequent footnotes link to sources and further reading, and a comprehensive index listing people, places, and events mentioned. These tools are meant to aid those who wish to dive deeper into the subject. The author hopes that this volume will serve both scholars and casual readers.

The proud descendants of the Indian tribes mentioned herein who today continue their rich heritage as Arizona citizens are spared any judgmental observation or opinions regarding the violence exhibited by all sides during the Indian Wars of Arizona. Such debates are far outside the author's purpose. The drama in this book is the ancient story of Man against Man. Throughout human history, some try to keep what is theirs while others try to take it away. It has been said that land cannot be stolen... it can only be won or lost. Had the Indian's numbers and armament matched their determination the outcome could, very possibly, have been different. Herein, in chronological order, are true accounts starting in 1849 with the first U.S. Army post on the Colorado River, near Yuma. The years between that event and the end of the century are the scope of this book.

It is hoped the reader will catch a glimpse of the gestation of Arizona. The author believes this volume can serve as a useful guide on road trips around the great state of Arizona. Ditat Deus.