The Money Confusion: How Illiteracy About Currencies and Inflation Sets the Stage for the Crypto Revolution (Hardcover) 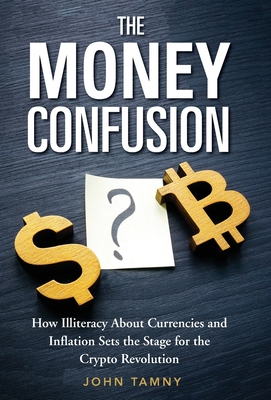 All great commercial advances begin with surges of investment that the simple in thought na vely deride as "bubbles", followed by "bust". In 2022, after frenzied investing in the years prior, the "bust" finally came for cryptocurrencies.

Such is the basis for John Tamny's confident assertion in The Money Confusion that the future of money is at our doorstep. The crypto collapse of 2022 was paradoxically the signal that it will replace traditional forms of money sooner than most think.

Money, Tamny argues, is a natural market phenomenon and one that asserts itself even in a world of government-issued paper. While economists and pundits hide behind charts, equations and supercilious commentary about the so-called "money supply," Tamny provides familiar examples from the real-world to expose this mysticism as modern-day phrenology.

He makes plain throughout a book that rejects nearly all conventional wisdom about money that a focus on "money supply" is the surest sign of a thought process hopelessly off course. In truth, trusted money in circulation is a natural consequence of commerce, not the instigator as economists imagine.

That a free market for money has formed in a world of government currencies is what sets the stage for private money as the eventual replacement for government mediums of exchange. Precisely because money facilitates global cooperation on the way to staggering advances in productivity, it's essential that money be trusted as a measure in the same way that the mile, degree and tablespoon are trusted today.

Although academia and policymakers misunderstand money and inflation to a frightening degree, the thinkers, innovators, and risk-takers have forged a better way. The future is here for money; and that future, Tamny explains, is blindingly bright.

John Tamny is Vice President at FreedomWorks, editor of RealClearMarkets, a senior fellow at The Market Institute, and a senior economic advisor to mutual fund firm Applied Finance Group. Tamny is the author of six books including Popular Economics, The End of Work, and When Politicians Panicked. He lives in Bethesda, MD with his wife Kendall, and kids Claire and Reed.