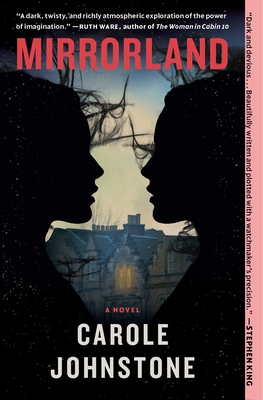 “You will tie yourself in knots trying to figure out what’s happening in Mirrorland, the story of two sisters growing up with different stories attached to the games they play, stories that take on a life of their own years later as buried memories come to the fore.”
— Pete Mock, McIntyre's Fine Books, Pittsboro, NC

“Unnerving.” —People
“Unsettling...unlocks its mysteries slowly.” —The New York Times Book Review
“A dark, twisty, and richly atmospheric exploration of the power of imagination” —Ruth Ware, author of The Woman in Cabin 10

“Beautifully written and told with a watchmaker’s precision” (Stephen King), Mirrorland is a thrilling psychological suspense novel about twin sisters, the man they both love, the house that has always haunted them, and the childhood stories they can’t leave behind.

Cat lives in Los Angeles, far from 36 Westeryk Road, the imposing gothic house in Edinburgh where she and her estranged twin sister, El, grew up. As kids, they invented Mirrorland, a dark, imaginary place under the pantry stairs, full of pirates, witches, and clowns. These days, Cat rarely thinks about their childhood home, or the fact that El now lives there with her husband, Ross.

But when El mysteriously disappears after going out on her sailboat, Cat is forced to return to 36 Westeryk Road, which hasn’t changed in twenty years. The grand old house is still full of shadowy corners, and at every turn Cat finds herself stumbling on long-held secrets and terrifying ghosts from the past. Because someone—El?—has left Cat clues: a treasure hunt that leads them back to Mirrorland, where the truth lies waiting...

Carole Johnstone’s award-winning short fiction has appeared in annual “Best of” anthologies in the United States and United Kingdom. She lives with her husband in an old farmhouse outside Glasgow, Scotland, though her heart belongs to the sea and the wild islands of the Hebrides. She is the author of Mirrorland and The Blackhouse.

"In this unsettling, labyrinthine tale, it is hard at first to tell who the villain is—or even how many villains there are in a family with a great deal to hide. The book unlocks its mysteries slowly, twisting the knife a little deeper with each revelation." —Sarah Lyall, The New York Times Book Review

“An unnerving thriller. . . . Fantasy and reality intermingle when a twin returns to her childhood home to search for her estranged sister. As Cat roams the creepy house, memories of an imaginary world the twins created spring to life.” —People Magazine

"Fans of twist-filled thrillers, look no further than Johnstone's tale of estranged twins who invented their own dark and imaginary world." —E! News

“It’s hard to believe that this is Johnstone’s first novel. It’s slick and accomplished and drips with Gothic suspense, but never swings into melodrama. This is a writer to watch.” —Globe and Mail

"Johnstone has plenty of tricks up her sleeve in this suspenseful tale of betrayal and revenge, memory and imagination, and the thin line between love and hate." —Business Insider

"Enthralling . . . a dark, twisting thriller that explores the pitch-black corners of people’s minds; how good and bad, love and hate, terror and joy can co-exist; and how childhood memories can be rewritten with time as the lines between imagination and reality are blurred. Fans of Gillian Flynn's creeping dread and Liane Moriarty's nuanced morality and complex relationships should love this book." —Kirkus Reviews

“Johnstone’s debut had me flying through the pages while also wanting to sink into her gorgeous writing. Paired with twists and turns I didn’t see coming, readers will certainly be in for tons of surprises.” —Buzzfeed

"This ambitious blend of psychological suspense and horror casts a powerful light on the liberating power of imagination." —Publishers Weekly

“Melds intricate family dynamics into a gripping mystery with the undercurrent of a gothic novel.” —Oline Gogdill, Shelf Awareness

"Johnstone pulls out all the stops in creating an atmospheric mystery.” —The Big Thrill

“An inherently riveting and compulsive page-turning suspense thriller about the power of imagination and the price of freedom.” —Midwest Book Review

“Carole Johnstone’s debut feels like the love child of Gillian Flynn and Stephen King. In Mirrorland, nothing is as it appears and the kaleidoscope twists and turns will have you frantically turning the pages until you reach the gasp-out-loud ending.” —Greer Hendricks, #1 New York Times best-selling co-author of The Wife Between Us

"A dark, twisty and richly atmospheric exploration of the power of imagination" —Ruth Ware, author of One by One and The Woman in Cabin 10

“A dark and twisty thriller told with thumping heart and extraordinary tenderness—Mirrorland is as much a celebration of imagination and its escapism as an examination of trauma and its echoes.” —Kiran Millwood Hargrave, author of The Mercies

"A sinister study in estranged sisterhood and the shapeshifting powers of repression and denial. Thick with propulsive twists and immensely readable." —Sue Rainsford, author of Follow Me to Ground

"Thrilling, dark, and propulsive, Mirrorland is an unsettling shape-shifter of a novel. This is a story about a mysterious death and a long-buried secret, but it's also a fascinating, terrifying portrait of how we seek refuge in our imaginations—and how easily imagination can be confused with reality." —Anna Pitoniak, author of Necessary People

"An intricate, brilliant puzzle of a novel where past and present, fantasy and reality, are all clues that one twin must decipher to uncover the fate of her missing sister and the secrets of their shared past. It's Gone Girl meets Rebecca . . . atmospheric, tightly plotted and utterly gripping, a must read for fans of Ruth Ware and Gillian Flynn." —Sarah Pinborough, author of Dead to Her and Behind Her Eyes