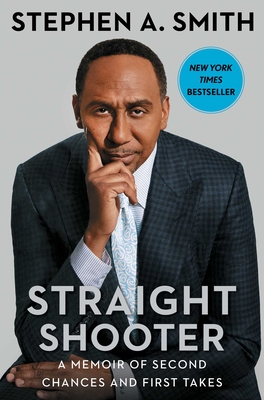 America’s most popular sports media figure tells it like it is in this surprisingly personal book, not only dishing out his signature, uninhibited opinions but also revealing the challenges he overcame in childhood as well as at ESPN, and who he really is when the cameras are off.

Stephen A. Smith has never been handed anything, nor was he an overnight success. Growing up poor in Queens, the son of Caribbean immigrants and the youngest of six children, he was a sports-obsessed kid who faced a number of struggles, from undiagnosed dyslexia to getting enough cereal to fill his bowl. As a basketball player at Winston-Salem State University, he got a glimmer of his true calling when he wrote a newspaper column arguing for the retirement of his own Hall of Fame coach, Clarence Gaines.

Smith hustled and rose up from a high school reporter at Daily News (New York) to a general sports columnist at The Philadelphia Inquirer in the 1990s, before getting his own show at ESPN in 2005. After he was unceremoniously fired from the network in 2009, he became even more determined to fight for success. He got himself rehired two years later and, with his razor-sharp intelligence and fearless debate style, found his role on the show he was destined to star in: First Take, the network’s flagship morning program.

In Straight Shooter, Smith writes about the greatest highs and deepest lows of his life and career. He gives his thoughts on Skip Bayless, Ray Rice, Colin Kaepernick, the New York Knicks, the Dallas Cowboys, and former President Donald Trump. But he also pulls back the curtain and talks about life beyond the set, sharing authentic stories about his negligent father, his loving mother, being a father himself, his battle with life-threatening COVID-19, and what he really thinks about politics and social issues. He does it all with the same intelligence, humor, and charm that has made him a household name.

Provocative, moving, and eye-opening, this book is the perfect gift for lovers of sports, television, and anyone who likes their stories delivered straight to the heart.

Stephen A. Smith rose from a reporter on high school sports at the Daily News (New York) and college and NBA beat reporter at The Philadelphia Inquirer to become the face of ESPN and its most important on-air personality. He is the star of the #1 morning sports talk show First Take; a premiere analyst on ESPN and ABC’s NBA Countdown; the host of NBA in Stephen A’s World on ESPN2 and ESPN+; and the host and producer of the podcast K[no]w Mercy with Stephen A. Smith. Smith has more than 12 million followers across social media platforms, and his opinions on sports make daily headlines. Follow him on Twitter @StephenASmith.

"Stephen A.’s passion for sports simply can’t be overstated. It exists in every fiber of his body, so when he speaks about it, or writes about it, it is raw, deeply authentic, and immensely entertaining. As you will discover on every page of this book, he brings this passion to anything he tackles."
—Bob Iger, #1 New York Times bestselling author of The Ride of a Lifetime: Lessons Learned from 15 Years as CEO of the Walt Disney Company

"You may think you know Stephen A. from his hot takes, his First Take. But you won’t know what makes him tick, what makes you love him or hate him, what brought him back from the television graveyard and made him irresistibly must-see for nearly twenty years until you read his autobiography. Do it, damnit!"
—Michael Wilbon, cohost of Pardon the Interruption and analyst on NBA Countdown

"Don’t call it a comeback—my man was let go by ESPN and came back bigger than ever. Coming from Hollis, Queens (aka home of hip-hop royalty Run-DMC), the man tells it like it is, and this book is the blueprint of tenacity. Pick it up and earn twenty years of wisdom just like that. This book gets five stars from me."
—Fat Joe, author of The Book of Jose: A Memoir