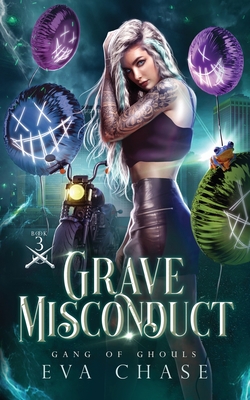 Psycho is as psycho does...

As if falling for the ghosts of four murdered gangsters wasn't crazy enough, it turns out we've got a real live supervillain on our hands. One with mysterious powers that reach way farther than we could have imagined.

And that villain has torn my sister away from me.

I'll stop at nothing to bring her back and see my men get the vengeance they deserve. It's just a little hard to win a war when you're not really sure what kind of monster you're up against. Or how many you're up against, for that matter.

There's a whole new dimension to my own powers that I'm only just starting to uncover-one that could level the playing field. But what if tapping into it makes me just as much of a monster as the pricks we're up against?

*Grave Misconduct is the third book in a darkly humorous new paranormal romance series by bestselling author Eva Chase. If you love sarcastic heroines with unexpected powers, obsessive supernatural men who'll do anything to defend their woman, and plenty of mystery and mayhem, dive right in *