Freedom: How We Lose It and How We Fight Back (Compact Disc) 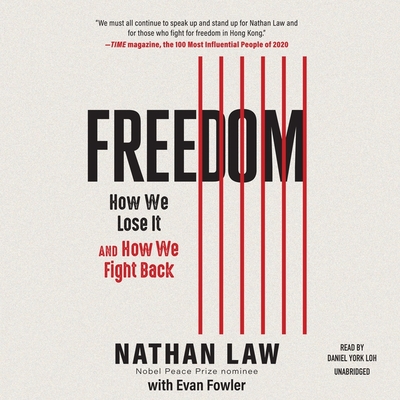 By Nathan Law, Daniel York Loh (Read by), Evan Fowler (Contribution by)
$36.95
It's Complicated - Contact Us for More Information

In this dispatch from exile, Hong Kong political activist Nathan Law explores the meaning of freedom--and shows how easily freedoms can be eroded or dismantled. Freedom is fragile--it is not a given, and each generation must fight to protect it, whether in emerging democracies or in the Western world, where freedom is too often taken for granted.

Law sets out to prove the value of what we take to be inherently bestowed upon us as human beings, and to expose the Chinese government as it barricades its citizens from enjoying freedom. He lays out how the government controls what people know and are allowed to think, suppresses the truth, and undermines democratic processes by censoring its own members. If freedom is a basic human right, then why were lawyers, journalists, and activists being jailed, and why has Nathan Law been labeled a wanted fugitive?

Rooted in his own experience as a former elected official and student leader of the Umbrella Movement, Law explores not just how important freedom is in principle for human beings to thrive, but how it is put into practice. What does it mean to be able to speak freely, and what happens when the concept collapses? How can the law both protect and abolish our freedoms? And why should we place such importance on free and fair elections? What does it mean to be truly free? Nathan Law has worked tirelessly to apply pressure in order to reshape freedom in Hong Kong, because it is with freedom that we'll live as we're meant to be.