Wednesday, October 2nd, 2019, 7 pm at the Capitol Center for the Arts. This is a ticketed event. Tickets are available via CCA website.

Gibson's Bookstore is thrilled, in partnership with the Capitol Center for the Arts and New Hampshire Public Radio, to bring international best-selling author Ann Patchett to the main stage for an evening of literary discussion with NHPR's Peter Biello. They'll be in conversation about her newest novel, The Dutch House, a richly moving story that explores the indelible bond between two siblings, the house of their childhood, and a past that will not let them go. A Q&A with the audience follows their chat.

ANN PATCHETT is the author of seven novels and three works of nonfiction. She is the winner of the PEN/Faulkner Award (2002), England's Orange Prize (2002), and the Book Sense Book of the Year (2003), and was named one of Time magazine's 100 Most Influential People in the World (2012). Her work has been translated into more than thirty languages. She is the co-owner of Parnassus Books in Nashville, Tennessee, where she lives with her husband, Karl, and their dog, Sparky.

PETER BIELLO is the host of All Things Considered at New Hampshire Public Radio. He also serves as the host of The Bookshelf podcast, which highlights New Hampshire and New England authors. Prior to coming to NHPR, he served as a producer and host at Vermont Public Radio and as a reporter/host in Wilmington, North Carolina.

Single ticket: $37.00, includes admission for one, and one signed copy of The Dutch House

Double ticket: $46.00, includes admission for two, and one signed copy of The Dutch House 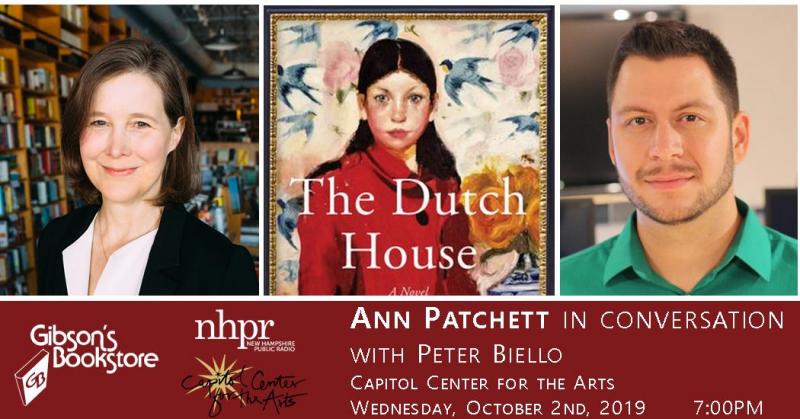